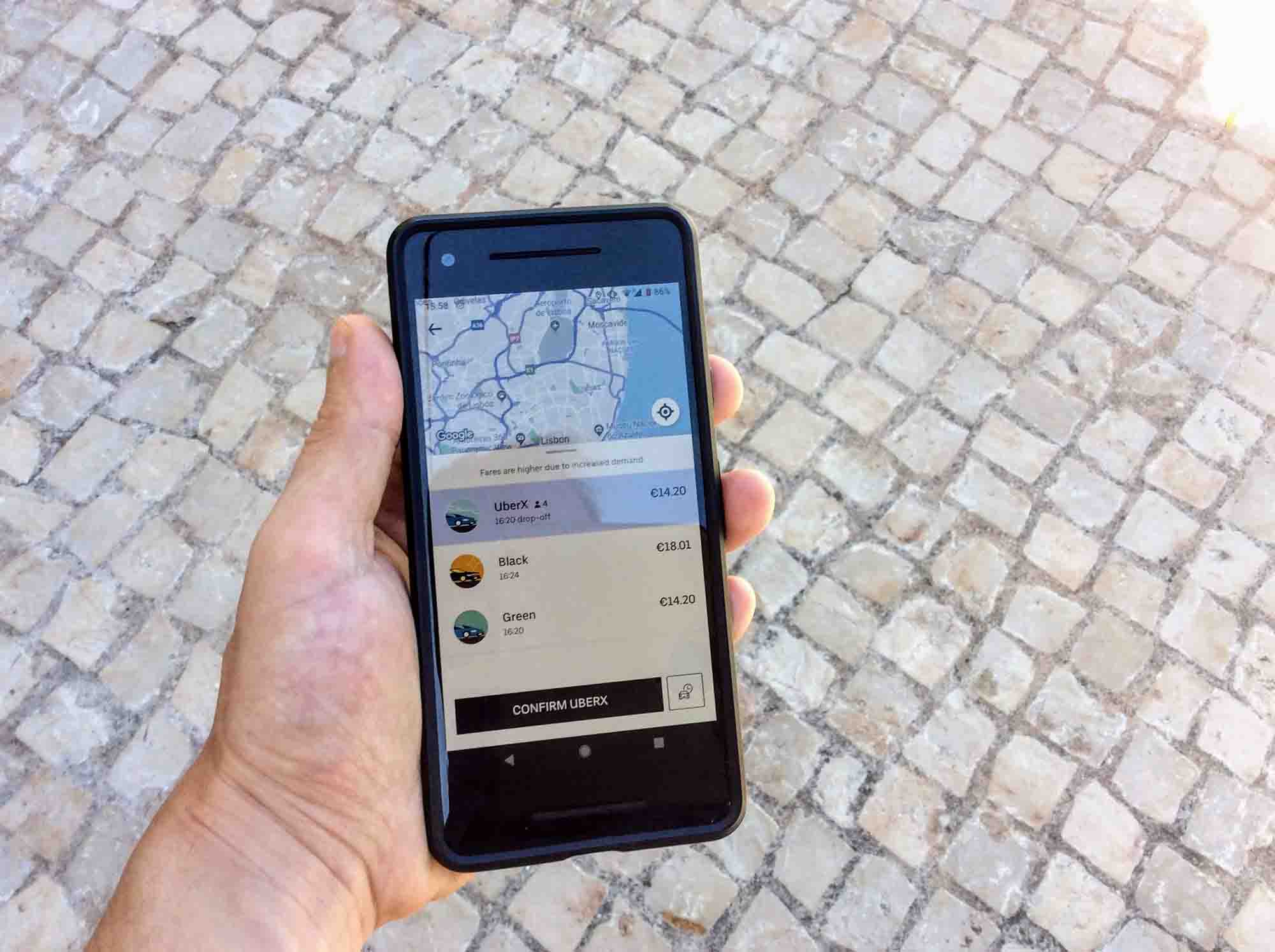 Once banned in Portugal, Uber is now available in several cities in Portugal like Lisbon, Porto, Braga, and across the Algarve.

It’s also not the only taxi app that you can use in Portugal. There are plenty of others like Bolt (previously Taxify) and Free now (previously MyTaxi).

Note: A lot of people are asking about using Uber for long distances e.g. Lisbon to Porto or Lisbon to Évora or Porto to the Algarve. This probably isn’t an option as Uber isn’t available in a lot of Portugal yet. If you need a long-distance driver you’ll probably need to book with a transfer company like Welcome Pickups.

Is Uber Cheaper than a normal taxi service?

Taxis in Portugal are actually quite affordable and, although Uber is often slightly cheaper, it doesn’t undercut them that much. It’s not as big a money-saver as it is in other countries.

It does have other benefits, though. The main benefits of using Uber over a traditional taxi are:

I get a lot of e-mails from people who have never used Uber before, and some who have never downloaded an app, who panic because they think they have to use Uber if they come to Portugal. That’s definitely not the case.

You should feel comfortable using a traditional taxi in Portugal. Yes, some of the drivers at the airport will overcharge you but because taxis are normally fairly cheap in Portugal it won’t add up to much.

Not all taxi drivers overcharge, either. It’s really just a few at the airports, and you can ask for a quote or estimation before you get in the car.

Where is Uber available in Portugal

Uber is available in Lisbon, Porto, and the Algarve.

The Algarve is a big place, so that doesn’t mean it’s available everywhere on the Algarve. You won’t have a problem getting an Uber in Faro and the coastal towns of Albufeira, Lagos, and Armação de Pêra, but you may struggle to find an Uber in the more rural parts of the Algarve.

In Lisbon and Porto, Uber is available throughout the city. I’ve had no problems getting around by Uber, and have been able to get a taxi within a few minutes of requesting one. I’ve also been able to get an Uber on the outskirts of both cities fairly easily.

At Lisbon Airport, the Uber (and Bolt, Freenow, etc) pickup area is at the departures area in Terminal 1 near the Kiss & Fly car park (also known as Parque P1 Partidas).

This is where the driver should pick you up, and most likely will. If you have any problems, try phoning the driver or send them a message through the app.

At Porto airport, the Uber (and Taxify, Cabify, etc) pickup area is front of the arrivals entrance on the first floor. Uber will tell you to go to the “Kiss and Fly” car park, which isn’t really signposted.

Basically, you walk outside the arrivals entrance/exit and go to the island in the middle of the two-lane road. Ubers normally come down the lane on the side furthest from the airport entrance but, standing in the middle, you’ll be able to look out for it on both sides.

Tipping in Portugal can be a confusing topic as there isn’t really a tipping culture in the same way as there is in other countries like the United States or, to a lesser degree, the United Kingdom.

The biggest rule about tipping in Portugal is that tips are always appreciated. Wages are low in Portugal, and people work hard, and every little helps.

You can either tip in the app or tip the driver directly. Uber doesn’t take a cut.

Should we be supporting Uber?

Taxi drivers in Portugal hate Uber. I can understand the taxi drivers’ frustration: they have had to get taxi licences and now a new group of people are coming into their territory without having had to do the hard work. I can also understand the frustration of there being a sudden flood of competition threatening their livelihoods.

But while I understand that frustration, I’m not necessarily sympathetic to it. The taxi industry is one that needs changing.

Taxi drivers in Lisbon often quote a higher price to tourists or take a longer-than-necessary route. I’ve had this happen to me.

In the Algarve, it’s also difficult to get a taxi late at night. Many taxi drivers clock off before midnight, which means a lot of people there drink and drive. Allowing Uber to operate there means there are going to be more taxis and more drivers who are willing to work late at night.

How have taxi drivers responded to Uber? Have they improved their service? Have they quoted fair prices? Have they made sure some drivers worked the late shift so that people could get taxis late at night? No.

In October 2016, Lisbon taxi drivers staged a protest against Uber and barricaded Lisbon airport with their cars.

Never used Uber before? Sign up here and get free credit.

Have you used Uber (or any other taxi app) in Portugal? Let us, and other people visiting Portugal, know your experiences by leaving a comment below.