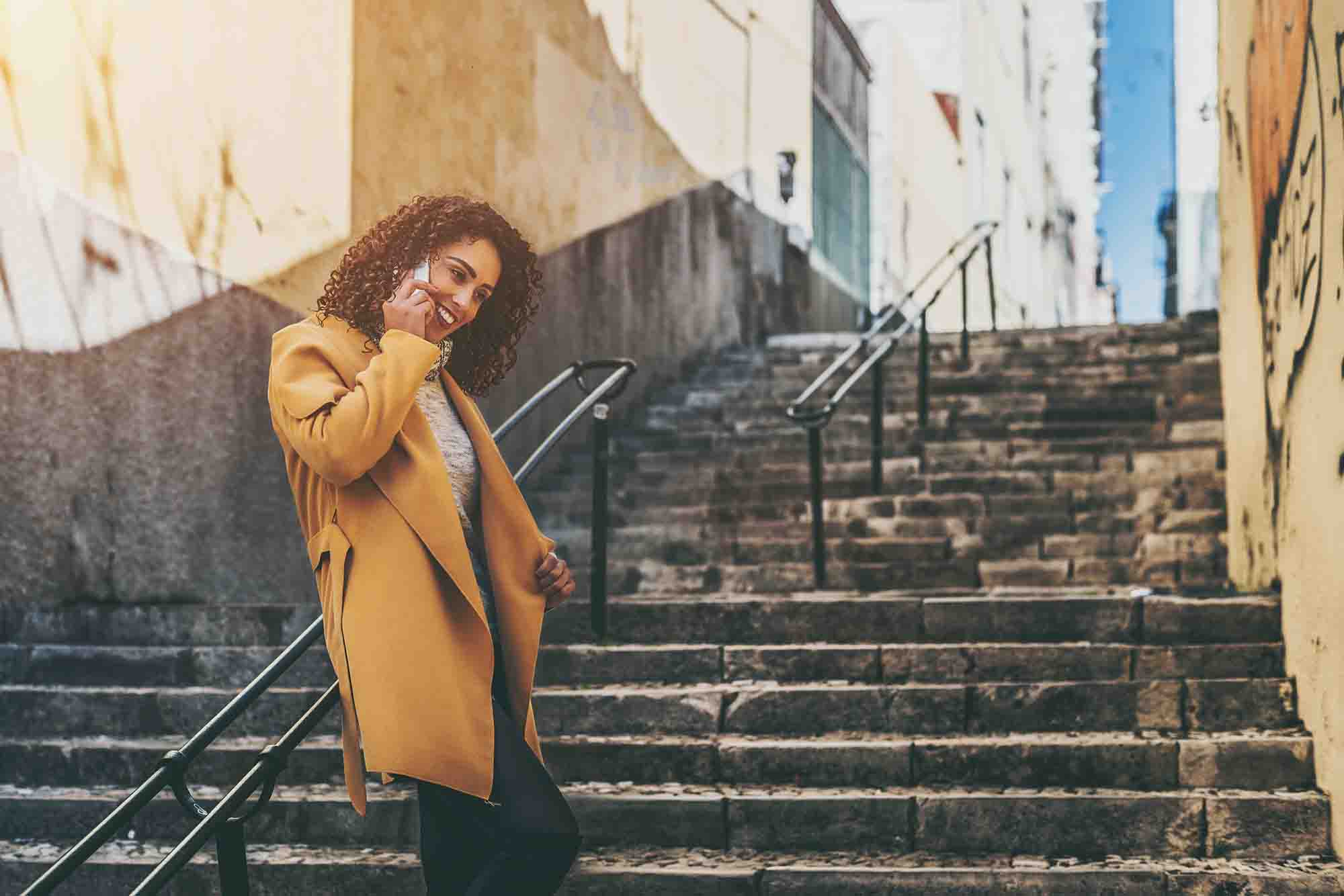 If you’re living in Portugal, you will need to get a Portuguese phone number at some point. You’ll probably need it to access you Portuguese bank account and you’ll need it when you register for anything, whether that’s registering for government services or at your local dentist, as most people won’t want to call an international phone number. And, in Portugal many businesses like dentists will want to call you the day before to check you’re still coming to your appointment.

It might also help you get your Amazon orders delivered: if a courier can’t find your house, they’re more likely to call a Portuguese phone number than an international one. Don’t get your hopes up though.

And, if you’re visiting Portugal on a short trip and don’t have a sim card from another country that allows affordable roaming, buying a Portuguese sim card (or an international sim card) will make using mobile internet here a lot more affordable.

Because of complex data packages and things like maintenance fees, tariffs in Portugal seem to be more confusing than they should be, however, I’ve tried to simplify things as much as possible. The TLDR; version is to go with Vodafone and cry yourself to sleep because data here is so expensive when compared to other European countries.

EU Roaming laws mean that you probably don’t need to switch sims if you have a simcard from another EU country, however, if you’re coming from outside the EU, it’s probably worth the switch.

All of the main networks, Vodafone, MEO, and NOS offer data sim cards that for a limited period of time (usually either 15 or 30 days). See tariffs for each of the networks below.

Vodafone has the best coverage of the three networks, and also has stores in many Portuguese airports which is perfect if you’re planning on grabbing an Uber outside of the airport.

Mobile data in Portugal isn’t as cheap as in some other European countries and many networks cap the amount of data you can use while roaming. Some networks and tariffs don’t even allow roaming. Topping up abroad can also be an issue.

Basically, if you’re planning on travelling around Europe, there are better options than a Portuguese sim card (like 3 Mobile or the even cheaper Smarty in the UK).

If you can’t be bothered scouring Amazon or eBay for random sim cards from other European countries, or don’t want the hassle of changing sim cards in different countries, you could consider the more expensive option of an unlimited data international sim card like the one offered by My Webspot.

If you don’t plan to use the internet on your phone, or you have a dual sim phone, and you really just want the Portuguese phone number to receive and maybe make the odd phonecall, there isn’t a lot in it.

The main thing you want to think about is whether the network will charge you an inactivity charge. Essentially, if you don’t make a phonecall or send a text, many Portuguese networks will charge you a taxa de manutenção or maintenance fee. MEO, for example, will take €1 per month from your credit every month that you’re inactive. Portugal is one of the few European countries that does this.

All about that data?

These days, most people will mainly be interested in data. Most texting and even phonecalls are done through apps like WhatsApp or Facebook messenger — lots of people go months and months without ever sending an old-fashioned SMS or making a phonecall.

When it comes to data, there isn’t a huge difference in cost between the network’s tarrifs. The main difference is coverage. According to most reports from Open Signal, Vodafone has the best coverage in Portugal, MEO is second, and NOS comes last.

If you’re in Lisbon, Porto, or a large town on the Algarve, this shouldn’t* make as big a difference, however, if you’re planning on living in a more remote part of Portugal, it’s a good idea to check the coverage quality by downloading the Open Signal app. NPerf also does coverage maps, but the Open Signal app is prettier.

*Although it shouldn’t make a huge difference, many people still say that Vodafone is much better than its competitors even in city centres.

After deciding on a network, the next step is to decide whether to go prepaid (pré-pago) or to get a contract (pós-pago). If you’re only staying a few months, prepaid makes the most sense.

If you’re planning on living in Portugal for at least a year, a contract will be better value for money but does mean tying yourself into a contract.

Prepaid data sim cards in Portugal are quite expensive when compared to other European countries, and the tariffs are more confusing than they need to be with very few networks offering a basic “data only sim.”

As mentioned previously, Vodafone is generally the most-recommended network and the best for coverage, so it makes the most sense to focus on their tariffs. If you want to go into more depth, Prepaid With Data is a very detailed Wiki that covers everything you need to know about prepaid data around the world. It’s usually quite up-to-date as well.

Alternatively, you could just look at the tariffs on each of the network websites.

For 5 GB of data, expect to pay somewhere between €15 and €20 for 30 days usage (varies depending on the network). NOS seems to be the only network that offers unlimited data for prepaid users.

One thing you’ll notice is that many networks charge a basic rate for data (e.g. €10 for 1 GB) but you can also buy a data add-on for messenger apps, video apps, or social media apps.

Another thing to watch out for is that some bundles or tariffs are per week or for 14/15 days (or even 28 days) rather than a simple 30 days.

Most networks have special tariffs that are for young people (usually under 25). If you’re over 25, you obviously won’t be eligible.

If you’re buying a sim card, you may be asked to show ID (a passport or residency card, for example). Some places don’t ask for it, but it’s a good idea to have it on you just in case.

Mobile contracts are slightly less confusing, especially if you just splash out for an unlimited data contract which saves thinking about data limits and add-ons.

Vodafone Red Infinity and M Móvel Illimitado, both of which come with unlimited data, calls, and texts, cost around €40 per month (or more if you want Vodafone’s Red Infinity Giga which includes speeds of up to 1 GB).

Of course, you don’t have to splash out on unlimited data. All of the networks have contracts that allow you to get say 5 GB or 10 GB of data and most allow you to add add-ons for messaging, social media, video etc in the same way as you do with PAYG (prepaid). Although that might make it seem like there’s little difference with prepaid tariffs, the rates are better than prepaid, and often allow you to purchase a bigger monthly data allowance.

Although mobile internet is always going to be expensive in Portugal, two ways that you can potentially save money are:

It’s also worth considering whether unlimited mobile internet is enough for you – some people just don’t need fibre at home as well.

A benefit of having home broadband, however, is that many networks like MEO and NOS have wifi hotspots dotted around towns and cities that their customers can connect to and use for free without having to eat into your data allowance.

Vodafone, MEO, and NOS aren’t the only networks in Portugal, but all of the others (e.g. Lycamobile) “piggyback” on the back of these three networks which means they use their masts for coverage. UZO and NOWO use MEO’s network and Lycamobile uses Vodafone’s network, for example.

One thing to be wary of with all networks, but particularly secondary networks, is that the deals they advertise on their website are often introductory deals. You might see 5GB for €10, but only later realise that’s for the first month or first 3 months.

Hacks to get around data restrictions

Some people just can’t bring themselves to spend €10 for 2 GB internet when they might get 5 times that in their home country. The easiest solution is to simply accept that things are different here, put it behind you, and move on with your life.

If you can’t do that, however, there are a few things you can do:

Note: If you have a Portuguese sim card and an international one, you need to keep the Portuguese one topped up and active to avoid it being disconnected or being charged a maintenance fee (see above). It’s also possible that your non-Portuguese operator will eventually cut you off if they feel you’ve been roaming for too long.