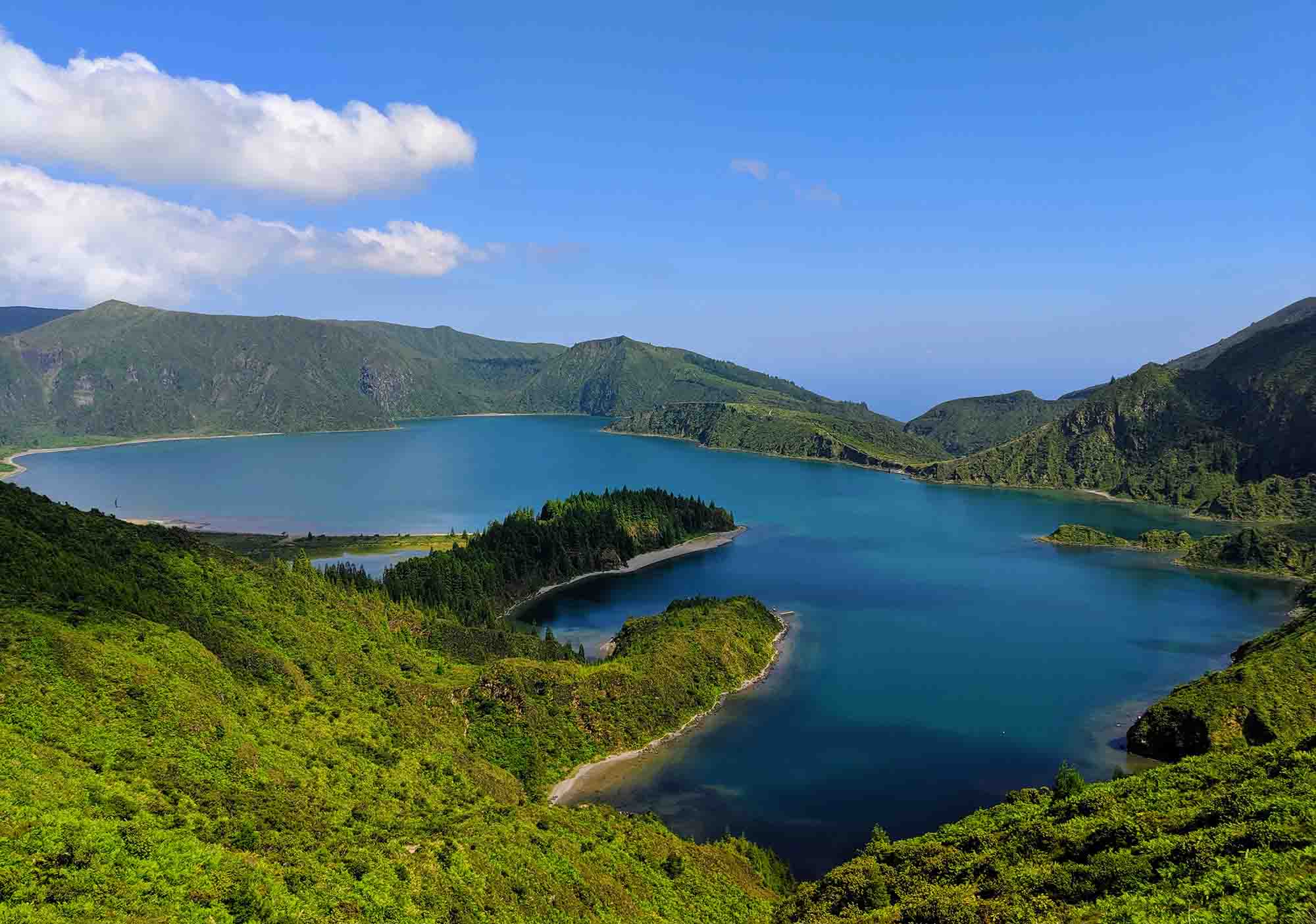 The Azores (or Açores in Portuguese) is an archipelago or group of nine islands that’s located in the Atlantic Ocean between continental Portugal and North America. Although the islands are in the middle of the Atlantic Ocean, they’re closer to Portugal than they are North America: the flight time from Lisbon to Ponta Delgada is around 2 hours and 10 minutes while the flight time from Ponta Delgada to Boston is around 5 hours and 40 minutes.

The islands were formed due to shifting plates and volcanic activity, and this is characteristic of the islands’ landscapes. São Miguel is made up of beautiful “lagoas” or lakes inside the craters of former volcanoes. São Jorge is made up of “Fajas” which are cliffs that have collapsed and formed new, tiny peninsulas of land – and many of them were formed during earthquakes. Mount Pico, Portugal’s highest mountain on the island of Pico, was once a volcano and, when you get to the top, you’ll actually be inside the crater of a former volcano.

These islands are unlike anywhere in continental Portugal. Not only do the islands have a different landscape because of the previous volcanic activity, but the weather is different: it’s more tropical and humid than mainland Portugal.

It’s a fascinating Portugal that most people have never heard of. It’s expected to explode in popularity very soon, which obviously will change the DNA of the islands completely. If you are able to visit the Azores, now is the time to do it!

Photos of The Azores

Everywhere has its pros and cons, including The Azores. Some of these pros and cons vary depending on which island you live on. For example, as the larger islands, São Miguel and Terceira tend to fair a lot better on many things, including availability of flights and shopping options.

Island in The Azores

São Miguel has plenty of attractions, from its beautiful lakes to its tea and pineapple plantations. It’s the largest and most developed island in The Azores, and Ponta Delgada, the capital, has all of the same amenities you would expect in a small city in mainland Portugal. It’s also home to the largest airport in The Azores, João Paulo II Airport, with plenty of flights to mainland Portugal, a few European destinations, and one or two destinations in North America as well. All of this does mean that São Miguel is also the most popular island for tourists to visit but for many that’s a small price to pay for what you get in return.

Terceira is the second-largest island in The Azores. It doesn’t have as many dramatic attractions as São Miguel, which means it doesn’t get as touristy but it does get a few. Its airport, Lajes International Airport, has plenty of flights to mainland Portugal as well as a few international ones — not as many as Ponta Delgada Airport on São Miguel, but a few. Angra do Heroísmo, the main city on the island, is also reasonably large in size (by Azores standards) with pretty much all of the amenities you’re likely to need.

Famous for its stunning natural attractions — including a former volcano that you can walk around the edge of, Faial has plenty to offer. It’s a popular destination for sailors crossing the Atlantic and its said that the gin and tonic cocktail was invented here. It’s also just a 30-minute ferry ride from Pico island, so living on either Pico or Faial would mean easy access to the other.

Pico is known for three things: whale watching, wine, and Pico mountain (Portugal’s tallest mountain). Although most people go whale-watching from a private boat tour, often you can see them when they swim up close to the land. It’s also just a short 30-minute ferry ride from Faial, meaning you can easily visit either island whenever you want to.

Known as the island of fajãs, São Jorge is famous for its wild and rugged landscape. It’s so rugged that one town, Fajã de Santo Cristo, has no mains electricity, internet, or proper roads. The only way to get there is to hike (although many locals have quadbikes). Don’t worry: there are good roads and electricity in the rest of the island but, even still, São Jorge has a very rugged feel to it.

Known for its rolling hills and white villages, Graciosa or the white island is the second-smallest Azores island in terms of size. It’s also the most northerly of the islands, located around 80 km northwest of Terceira.

Flores means flowers in Portuguese, and this gives you some idea of what the island is like. It is one of the most beautiful islands in The Azores; floral, green, and yellow. While all of the islands are perfect for hikers and nature lovers, many consider Flores the most beautiful.

The smallest island in terms of population, with just over 400 residents. This is perfect if you’re looking for somewhere incredibly remote, but it could be too remote for a lot of people.

The Azores is part of Portugal, which means that residents have access to the public healthcare system where treatment is normally free (or there’s a very small subsidy). However, the options available will — as with everything on The Azores — vary depending on which island you live on. There are currently only three hospitals in The Azores[10]https://www.theportugalnews.com/news/2021-03-12/first-private-hospital-opens-in-the-azores/58723 (on São Miguel, Terceira, and Faial) and if you live on one of the other islands you will normally need to travel to one of these islands, mainland Portugal, or wait for a travelling doctor to come and visit you.

In 2021, the first private hospital, Hospital Internacional dos Açores, opened in Lagoa on the island of São Miguel.

As with everything else, the range of available supermarkets and shops varies from island to island. On São Miguel, for example, there’s a large Continente Modelo and this is housed inside a shopping centre, Parque Atlantico, where you have shops like Berksha, Claire’s, and Gato Preto. On a smaller island, however, you may be limited to small minimercados, which often have very limited stock.

Getting to and around The Azores

Getting to The Azores

Each of the islands in The Azores has an airport, and there are also ferries, but many of the smaller islands do not have direct flights to mainland Portugal. Normally you’ll need to fly to another airport, like Ponta Delgada Airport on São Miguel, and then take a connecting flight or ferry. There is currently no ferry service between continental Portugal and The Azores.

Getting from island to island

There are two main ways to get around the Azores:

The ferry is normally considerably cheaper but, depending on the journey, flying can be a lot faster and you can’t go everywhere by ferry. You can’t go from the left cluster to the right cluster (or vice versa) for example. To go from São Miguel to Flores, you would need to go to Faial first (typically a 16-hour and 4-stop journey) and then take the ferry from there to Flores (another 9 hours or so). The non-stop flight, in comparison, typically takes 1 hour and 15 minutes.

In terms of weather, the best months are between May and October. However, even during the “good weather season,” you really need to prepare for both rain and sunshine — often in the space of a couple of hours. If it looks sunny on the day, bring a raincoat with you just in case (and if it looks wet, bring your swimsuit and some sunscreen just in case).