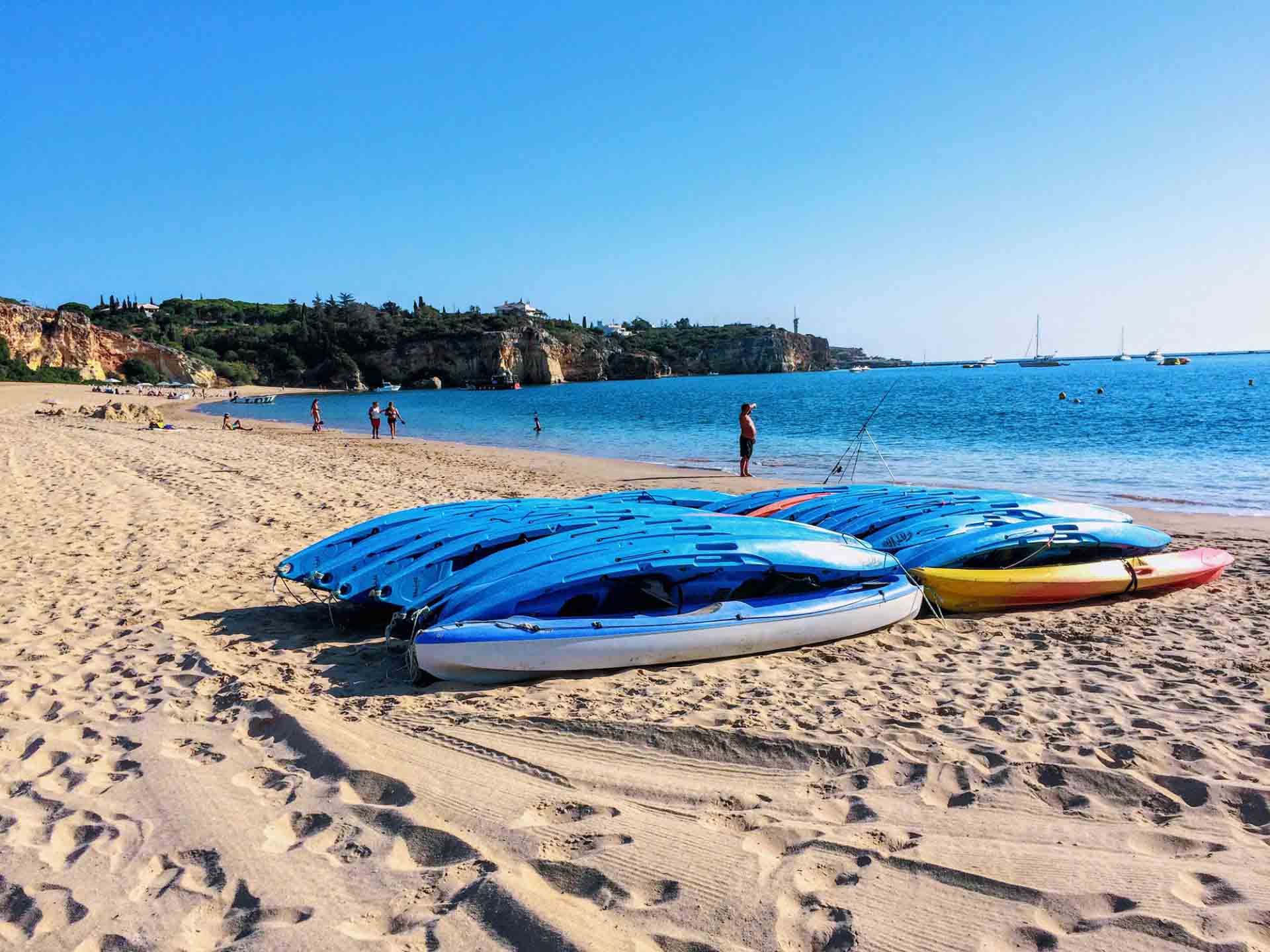 The Algarve is home to some of the most beautiful beaches in the world, and that’s no exaggeration. Many Algarve beaches have won awards and accolades from the likes of TripAdvisor, the Michelin Guide, Condé Nast Traveler, and Vogue.

There are more than 100 beaches on the Algarve. Some are small, and may even only be accessible by boat while others are long and their proximity to popular resorts and coastal towns mean they’re usually filled with sun-seekers from all over the world.

Whatever you’re looking for, whether it’s a beach that’s easily accessible from your hotel or somewhere that’s so remote that few if any tourists know about it, there’s a beach on the Algarve that’s just right for you.

The beach is famous for its stunning cliffs, which are fantastic for walking along (and they make a beautiful background for your photos as well). Praia da Marinha itself is also incredibly photogenic, and it’s little wonder that it has become one of the most popular beaches on the Central Algarve.

Meia Praia is the main beach for Lagos, one of the most popular coastal towns on the Western Algarve. This is quite a long beach, with plenty of space, so it never feels cramped or crowded.

You can actually walk to Meia Praia from Lagos, if you don’t have a car, but it will take around 15-20 minutes. If you’re driving, there are several car parks along the beach and many people park along the side of the road as well.

Praia dos Três Irmãos is the main beach for Alvor, a popular small coastal town that’s situated between Portimão and Lagos. The beach is quite long, with plenty of sand dunes, and it has a nice rugged feel to it.

You can easily get to Praia dos Três Irmãos from Alvor on foot. It’s also within driving distance of Portimão (6.5 km) and Lagos (20 km).

Faro, the capital of the Algarve and the largest city on the Algarve, isn’t a great beach destination: the main beach, Praia do Faro, is situated around 10 km from Faro and is only really accessible by car or public transport.

A lot of people from Faro don’t go to Praia do Faro, though. Instead, they prefer to take the ferry to Ilha da Barreta (also known as Ilha Deserta) and spend the day on Praia do Ilha Deserta.

This beach is more secluded and much quieter, and a beautiful place to spend a day on the Algarve. As the name Ilha Deserta (deserted island) suggests, there’s not a lot on this island, so you will need to come prepared.

There is actually one restaurant on the island, which Algarve locals all love called Estaminé, where you can get traditional Portuguese dishes like amêijoas à bulhão pato (clams à bulhão pato style), arroz de marisco (seafood restaurant), as well as the fish on the day.

Praia do Vau is a small but attractive beach that’s situated in Vau, roughly 2 km from the bustling resort of Praia da Rocha. This is a much quieter beach than Praia da Rocha, and the nearby Vau neighbourhood is ideal for those that want to be near Praia da Rocha but don’t want to be completely in the heart of the action.

It’s easy to walk between Praia do Vau and Praia da Rocha (it takes roughly 20 minutes), and there are also fantastic coastal walks along the cliffs near Vau. You can either come back to Vau or continue walking as far as Alvor, a coastal town that’s roughly 4 km down the coast.

Praia da Rocha is the name of the beach at the coastal resort of the same name, Praia da Rocha. Being near a resort as popular as Praia da Rocha this beach does attract a lot of people, but it’s long enough that there’s plenty of space for everyone.

There are plenty of amenities along and nearby this beach including plenty of restaurants, bars, and cafés, as well as private paid-access beach clubs like NoSoloÁgua.

Praia do Carvoeiro is the main beach for Carvoeiro, a popular beach town in the Central Algarve. The beach is quite small, and mainly attracts holidaymakers and locals who are staying in Carvoreiro.

Praia da Figueira is a small but fairly secluded beach that’s situated in the Western Algarve. The beach is far from any coastal town, resort, or hotel. To get to the beach, you’ll need to drive there, park in the nearby car park, and walk to the beach.

This remoteness means that Praia da Rocha attracts very few visitors: only those that are willing to make a special effort to visit it. You may even get the entire beach to yourself, which is perfect for those that are visiting the Algarve and looking for peace and quiet.

Praia de Quarteira is the main beach for Quarteira, a coastal resort near Vilamoura and Faro on the Central Algarve. The beach lacks the backdrop of the rugged sandstone cliffs that are so common in the rest of the Algarve and, as such, it tends to only really be visited by those staying at Quarteira or nearby Vilamoura.

This is another long beach and, even though Quarteira can get busy during the summer, there’s always enough space that it doesn’t feel crowded.

Praia Grande is situated roughly 1 km from Ferragudo, a small but quiet coastal town in the Central Algarve. The beach can be reached by foot, although a lot of people staying in Ferragudo prefer to drive there or take a taxi.

Because Praia Grande is situated at the bottom of an estuary, and a large harbour wall juts out across the estuary’s opening, the water here is very calm. This is ideal for those that get seasick or nauseous in the sea, and it’s perfect for those that want to try certain water sports like kayaking and paddle boarding.

Praia Da Luz is the beach of the coastal town with the same name. The beach is calm and peaceful, ideal for watersports, and it has been awarded the European blue flag which highlights beaches with clean sand and water. During the peak summer months the beach can get busy, but if you walk along it for long enough you’ll soon find a section that’s a little more secluded.

There are plenty of restaurants near the beach, particularly along the promenade, where you can grab lunch and dinner or a drink while you watch the sun set. A short walk inland, and you’ll find even more bars and restaurants.

Praia do Burgau is a small picturesque beach that’s situated near the coastal town of Burgau. The beach is backed by beautiful rugged cliffs which make this an incredibly scenic place to sunbathe.

This beach is very affected by the tide: when the tide comes in, the beach is completely engulfed by it. If you’re planning on spending the day here, it’s worth reading the tide report first.

Have you visited any of these Algarve beaches? Do you have a favourite? Let us know your thoughts, comments, and reviews by leaving a comment below.