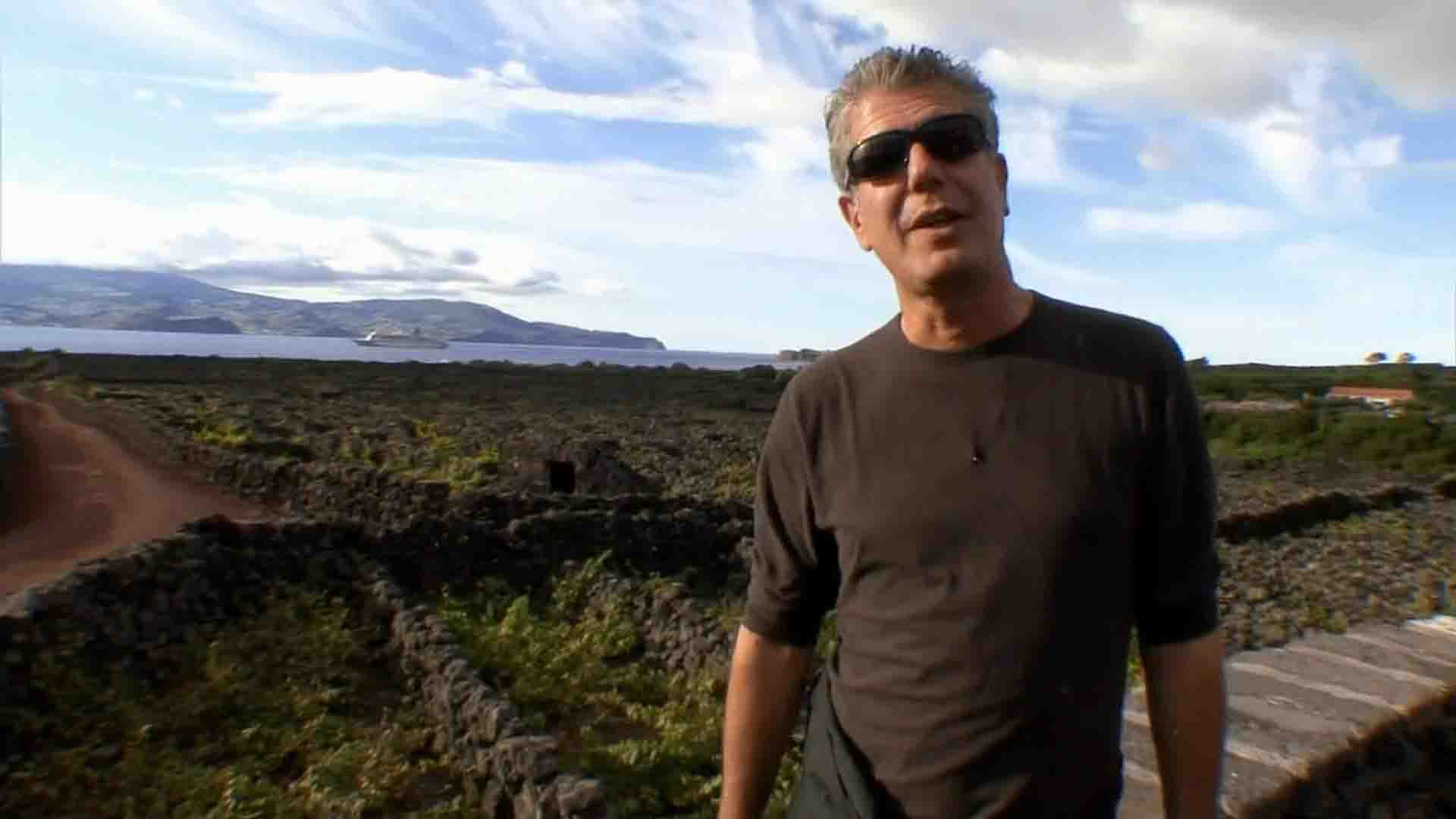 Although many TV chefs have filmed episodes of theirs shows in Lisbon, very few have come to the Azores. The late Anthony Bourdain was probably one of the first.

This episode first aired in January 2009. That was 3 years before he filmed the Lisbon episode of No Reservations, which is probably the most popular episode of all the ones filmed in Portugal.

Lisbon and Porto have changed so much since he filmed there and, considering that this was filmed so long ago, it’s likely that The Azores has changed quite a bit as well. It’s definitely much more on the tourist trail than it was then – although still nowhere near as popular as Lisbon is now.

This episode is very different to the Porto and Lisbon episodes. Bourdain is a lot more sarcastic, and even dismissive of Azorean life, than he is in later series. He also spends a lot more time in people’s homes than he does in restaurants, which does make it that little bit harder to follow in his footsteps.

That said, he did still visit a few bars and places around the island that you can also visit. If you’d like to follow in his footsteps, you’ll find the list of those places below.

The journey to The Azores actually starts in Fall River, Massachusetts. Located 85 km south of Boston, this town is known for having a very large Portuguese or Portuguese-origin population:

49% of residents here are Luso American or originate from somewhere in the former Portuguese empire. As a percentage, this town is considered to have the largest Portuguese-American population in the United States.

The first Azorean stop of the episode is to Carlos and Virginia’s farm in São Miguel. Here, Bourdain tries queijo fresco, which is very fresh in this instance, as well as the pork feast that is torresmos de vinha d’alhos.

You might struggle to find queijo fresco that’s quite that fresh but, even if you don’t have access to a goat or cow, you can make this cheese at home easily with just whole milk, rennet, and salt. You’ll also find it in most restaurants on the Azores and also in the shops and supermarkets, although, obviously, it won’t be as fresh as if you made it at home (and especially not as fresh as if you milked your own goat).

Furnas is a small town that’s located a little over 40 km from the island’s capital, Ponta Delgada. Furnas is famous for its hot springs, which you can actually bathe in (e.g. Poça da Dona Beija or Terra Nostra Garden), although Bourdain declines to do that.

Instead, they cook food in the springs – first, simple things like a boiled egg and then an entire meal of cozido das furnas.

There are tours where you can see Cozido Das Furnas being cooked (and eat it as well) like this one on GetYourGuide.com. Alternatively, you could just go and eat it at one of the many restaurants in Furnas.

You’ll also find cozido (cozido Portuguesa) in the rest of Portugal, as it’s one of the most popular Portuguese dishes, but it won’t be cooked in a volcano and where’s the fun in that?

The next stop on Bourdain’s trail was Casa de Pasto Flor, which can be found at Largo Conselheiro Artur Hintze Ribeiro 16, Ribeira Grande on São Miguel.

Next stop is Horta on the island of Faial. There are some ferry crossing between São Miguel and Faial, but the easiest way is to take a Ponta Delgada – Horta flight.

To see the maritime mural, head down to the marina in Horta.

Bourdain then visits Peter Café Sport in Faial for a Gin & Tonic (or two) and petiscos. This is actually a very famous bar, and somewhere that no sailor will leave Faial without stopping in at. It was also ranked one of the best bars in the world by Newsweek in 1986.

The “Barca dos Açores” contains morcela, linguiça, and pineapple as well as inhame (similar to yams), which may have come with his order but wasn’t mentioned in the show. He also orders “pastéis de bacalhau” or cod fritters and Queijo do Faial com azeitonas, the cheese with olives.

The next dish on the menu is Sopas Do Espírito Santo or “Soups of the Holy Spirit.” Each Azorean island has its own take on this recipe, and each one argues that they make the best and correct version of the dish. If you want to try it, you’re most likely to find it around Easter time.

Bourdain takes a boat ride with Diver Noberto over to the island of Pico. You can also get across by ferry on one of the two Faial to Pico routes: Horta to São Roque or Horta to Madalena.

According to the show, Pico was once known for its wine although most of it is consumed on the island. If you’re particularly interested in Azorean wine, one of the best times to visit is during the grape-picking festival of Festas das Vindimas in September.

You can also taste the wine at a number of different wine shops and vineyards on the island. Pico Wines in Madalena, for example, do tastings throughout the day and tours at specific times.

For his last meal on The Azores, Bourdain takes a boat to another island: the island of São Jorge. You can also get to them by ferry: either the Madalena – Velas ferry or the São Roque – Velas ferry.

This is a very basic part of the world, and many places have no electricity. There are some accommodation options here, and many people come here to get away from it all.

There are a few restaurants here as well where you can taste the local clams (amêijoas). Bourdain also at limpets (lampas), which are also common in Madeiran cuisine, barnacles, and baked grouper (garoupa).