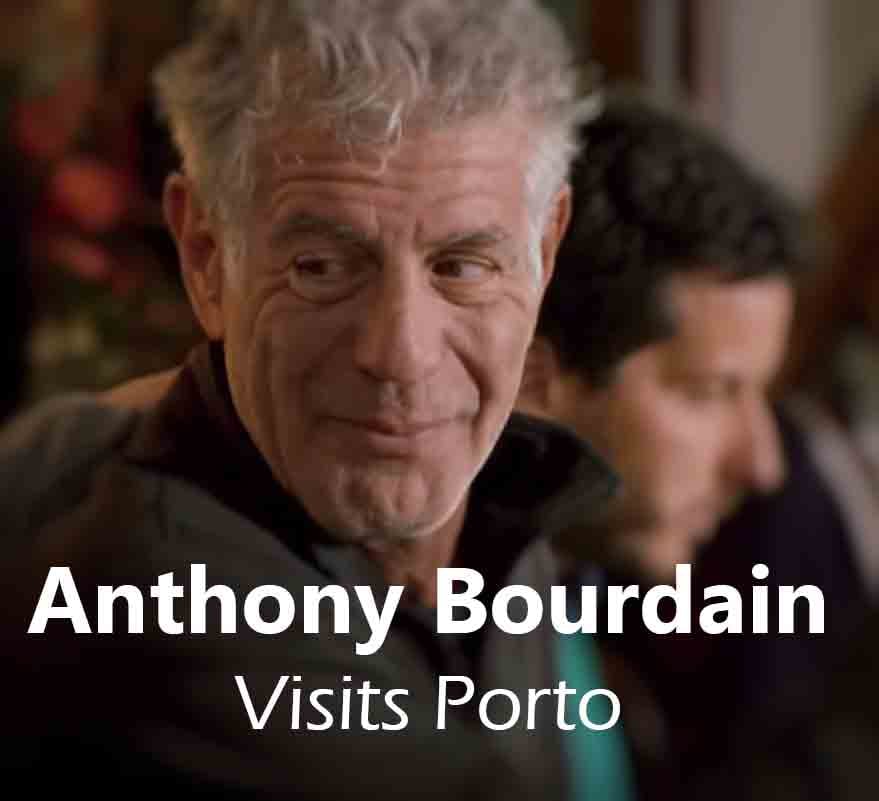 The late Anthony Bourdain returned to Porto as part of his “Parts Unknown” TV series, and I’ve been meaning to write about it for quite some time. Although this episode was released in 2017, it feels like much older episode than the 2012 “No Reservations” episode about Lisbon.

The lighting, the camera work, and that pig slaughtering scene all make this episode feel like it was shot in another era. Yes, there is a grim scene in which a pig is ritualistically slaughtered. If you are vegetarian, squeamish, or just a normal, sensitive human being, I’m now giving you the warning that I wasn’t given. That scene was grim!

I know a lot of people use the Lisbon episode as a guide for where to eat and drink in Lisbon, so I’ve written up a list of the places featured in the Porto Parts Unknown episode as well. Hopefully, this will make your trip to Porto more enjoyable and allow you to see some of the most interesting places in the city.

The fruit, vegetable, and of course fish market that Bourdain kept returning to was the Mercado do Bolhão on Rua Formosa.This is one of Porto’s most popular markets and, if you’re staying in self-catering accommodation, it’s a great place to come and do your shopping.

Markets in Portugal are typically cheaper than the supermarkets, and the quality of the produce is often better as well. Then there’s the atmosphere, which you get a little glimpse of in this episode. Markets, like this one, are friendly and, the more you shop there, the friendlier the vendors become.

After a couple of weeks, you’ll be a regular and you’ll often find the vendors giving you little treats or telling you which products they particularly recommend. 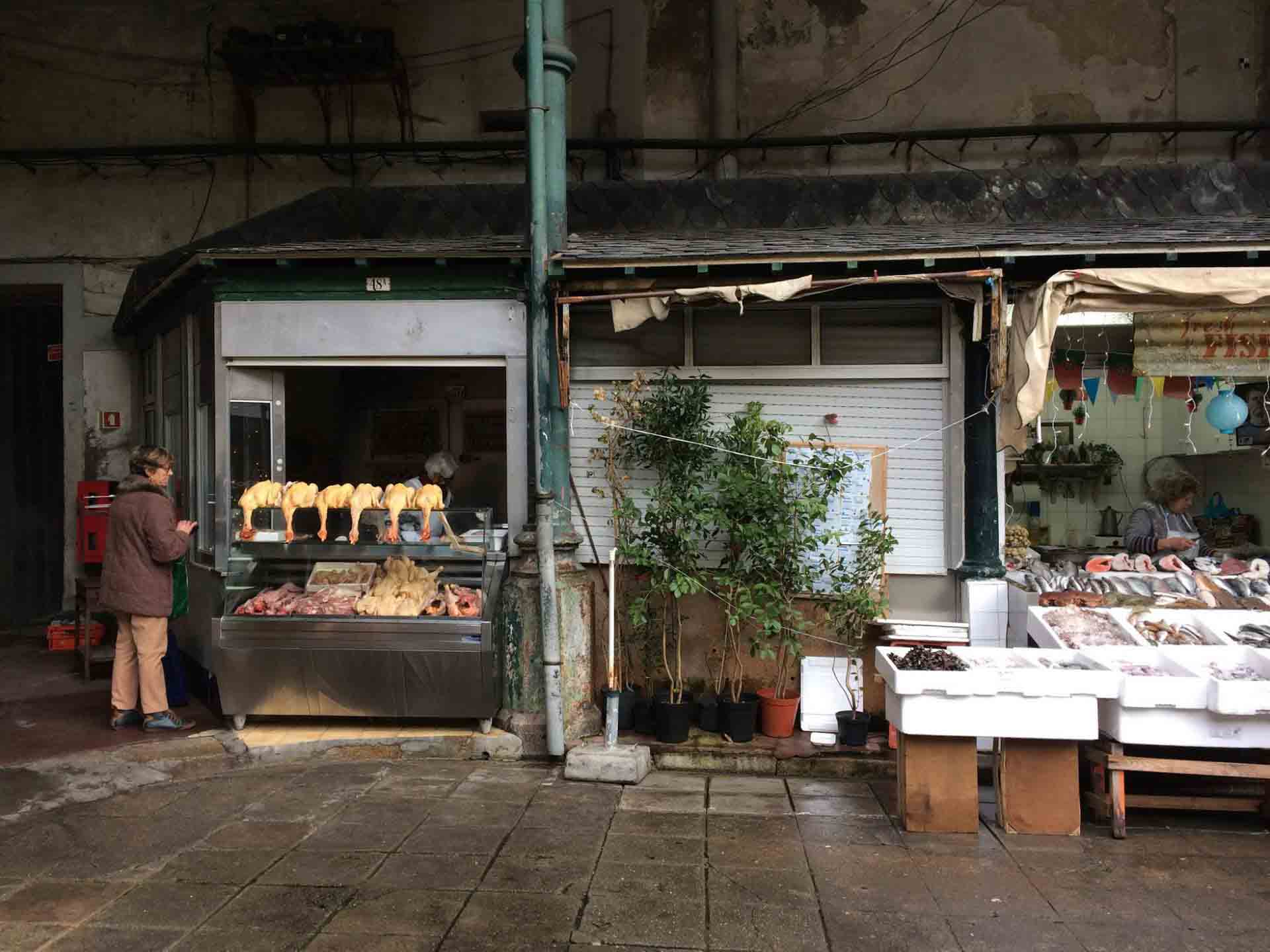 Be careful when buying fish, though. Those fishwives have tongues sharper than their filleting knives!

A Cozinha do Martinho

The first restaurant on the list is A Cozinha do Martinho where Bourdain met up with José De Meirelles. Meirelles was Bourdain’s first boss, and is listed as a co-writer on Anthony Bourdain’s Les Halles cookbook. Here, they ate petingas (fried sardines) and Tripas à Moda do Porto (tripe).

As a sidenote, people from Porto are called ‘Tripas’ (tripes) because of the amount of tripe that they traditionally eat. It’s a fun little jest between the rest of Portugal and the people of Portugal.

Tripe isn’t as commonly eaten anymore, both in Porto and even more so in the rest of the world. If you’ve never tried it before, and are curious about it, where better to try it than somewhere that’s so famous for it that the people are called Tripes?

Real Companhia Velha is one of Portugal’s oldest Port houses and wine producers. The company was founded by royal charter in 1756, and entrusted with the task of producing quality wine.

By 1781, Real Companhia Velha (or the Royal Oporto Wine Company) began shipping its Port wines to Catherine of Russia and, by 1809, Napoleon was demanding Port wine for his troops’ rations.

Real Companhia Velha is the port house where Bourdain drank Port and ate those two extremely gooey cheeses, Queijo da Serra and Queijo de Azeitão, along with the pumpkin jam.

Unlike French, Spanish, or Dutch cheese, it’s hard to find Portuguese cheese outside of Portugal, so it’s definitely worth trying it while you’re here in Portugal. These cheeses are available in most Portuguese supermarkets, at the markets, and on many petisco menus.

Petiscos are small snacks that you have alongside a glass of wine or a beer. The concept is similar to tapas and, although tapas is a Spanish word, you’ll find many Portuguese bars and restaurants use this word as it’s one that many people are familiar with.

You’ll find petiscos bars all over Porto and Lisbon now, and they’re a great place to go and try one of these cheeses, tinned sardines, or cured meats.

You can book a tour and tasting at Real Companhia Velha through Experitour.com. This port house is a little out of the way, compared to most of the others on the riverfront: around a 25-minute walk from the riverfront.

Almost all of the other port houses offer tours and tastings, however, and you can easily book them through sites like GetYourGuide.com.

The lampreia (lamprey eel) was cooked in someone’s home, but don’t worry: there are plenty of restaurants in Porto that serve it. Some places that you can try it include Casa Nanda, O Gaveto, Adega São Nicolau, Casa Lindo, and Rogério do Redondo.

Look out specifically for Lampreia à Bordaleza, the dish where the lamprey is cooked in its own blood. It’s worth noting that this is a seasonal dish, and so you may struggle to find it.

Don’t worry: Lampreia à Bordaleza isn’t the only Northern Portuguese dish where something is cooked in its own blood. Cabidela, which is made from poultry or rabbit, is another example that you’ll see on menus across Northern Portugal.

When the chicken or rabbit is captured, it is hung over a bowl of rice and the blood is left to trickle down into the rice. The rice is then cooked with the blood, along with the meat from the animal as well.

Gazela on Travessa Cimo de Vila is where Bourdain had the cachorrinhos, the hot dogs with a spicy sauce and cheese. This isn’t the only place in Porto where you can get a cachorro, but it’s definitely one of the most popular. If you want to try a hot dog like in that episode, this is the place to go.

No trip to Portugal is complete without taking a ride on one of the rickety old trams. These trams, many of which look like they should be in a museum, are a part of the furniture in Portugal. People still take these trams everyday, although some are being replaced with larger, more modern trams.

Bourdain took Tram 22, which is a circular tram that offers a scenic tour of Porto. It starts at Praça Gomes Teixeira, and offers some fantastic views of Clérigos Tower, Avenida dos Aliados, and the outside of São Bento train station.

This is probably the equivalent of taking Tram 28 in Lisbon. It’s nowhere near as busy as Tram 28, thankfully, which allows you to relax and really enjoy the experience.

Next on the list is Esplanada Marisqueira Antiga in Matosinhos, where Bourdain stopped for seafood.

This Michelin-listed restaurant is famous for its seafood including shrimp, barnacles, welks, clams, oyster, crab, and langoustines. Bourdain also had the robalo ao sal, seabass cooked in salt. This is a unique way of cooking fish, and something that’s worth trying if you get the chance.

Matança do Porco (The pig slaughtering)

The pig slaughtering took place on a farm outside of Porto, so this isn’t something tourists can easily attend unless they attend one of the Northern Portuguese festivals like Carnaval in Podence.

Alternatively, there are now a few vegetarian restaurants in Porto.

Fado is a traditional style of Portuguese folk music. It isn’t something usually associated with Porto: fado is more common in Coimbra and Lisbon, but a few places like Casa da Mariquinhas and the Cálem Cellars have Fado performances.

If you’re only visiting Porto, and nowhere else in Portugal, it’s definitely worth going to see a Fado performance while you’re here. If you’re going to Lisbon or Coimbra as well, you might as well wait and see a performance there.

Bourdain was invited to a meal of Papas Sarrabulho and Cozido à Portuguesa. You can try papas sarrabulho cheaply at Conga, one of the most popular bifana restaurants in Porto. Cozido à Portuguesa is even easier to find on a menu, and you’ll see it on menus throughout Portugal.

The francesinha is one of Porto’s most unusual dishes. A combination of ham, sausage, steak, cheese, bread, and a beer sauce, it’s the sort of sandwich a student might invent after a heavy night out.

People either love it or hate it. It’s not the most delicate dish, so be sure to go for a big long walk after.

You can try a Francesinha almost anywhere in Porto, and increasingly throughout Portugal. I’ve seen them on menus in many places in Lisbon and in The Algarve recently so, if you don’t get to try on in Porto, you’ll probably stumble across them again.

That said, this dish is traditional to Porto and it’s almost always better to try a dish on its home turf.  Bourdain had his Francesinha at O Afonso on Rua da Torrinha. Other popular places to try it include Café Santiago, Lado B, Bufete Fase, and Restaurante O Golfinho.

Haven’t seen the episode yet? It is on CNN, Netflix in some countries and, naturally, it has also been uploaded to Youtube.

Have you been to any of these Porto restaurants? Did Bourdain miss anywhere out? Let’s discuss in the comments below. Also, be sure to check out our guide to the different foods you should try in Portugal.