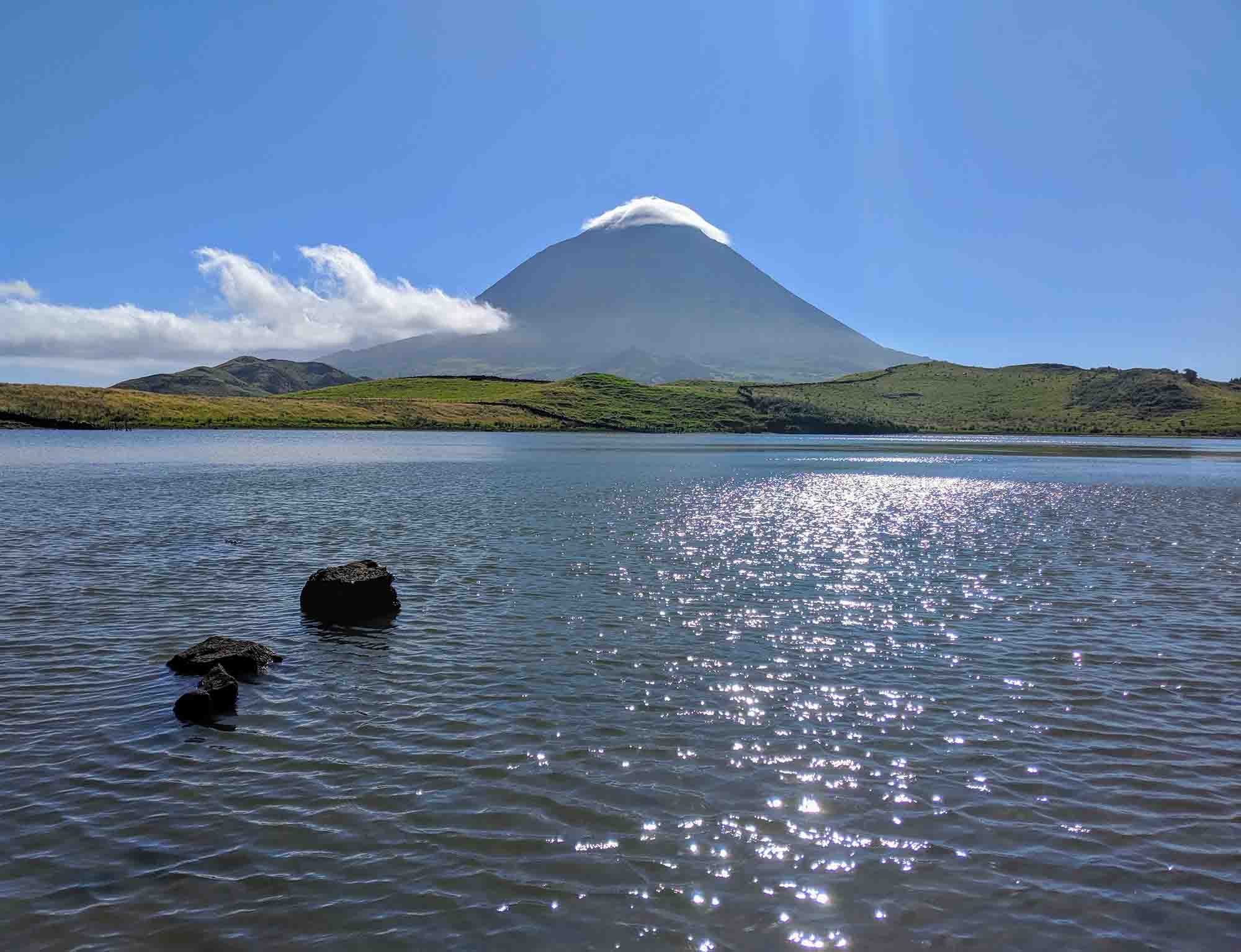 There are three main things to do on the island of Pico: whale watching, wine tasting, and climbing Mount Pico. Of the three of these, climbing Mount Pico was definitely my favourite. It was also the toughest, but, then again, it’s probably not fair to compare mountain climbing with drinking wine and a boat trip. 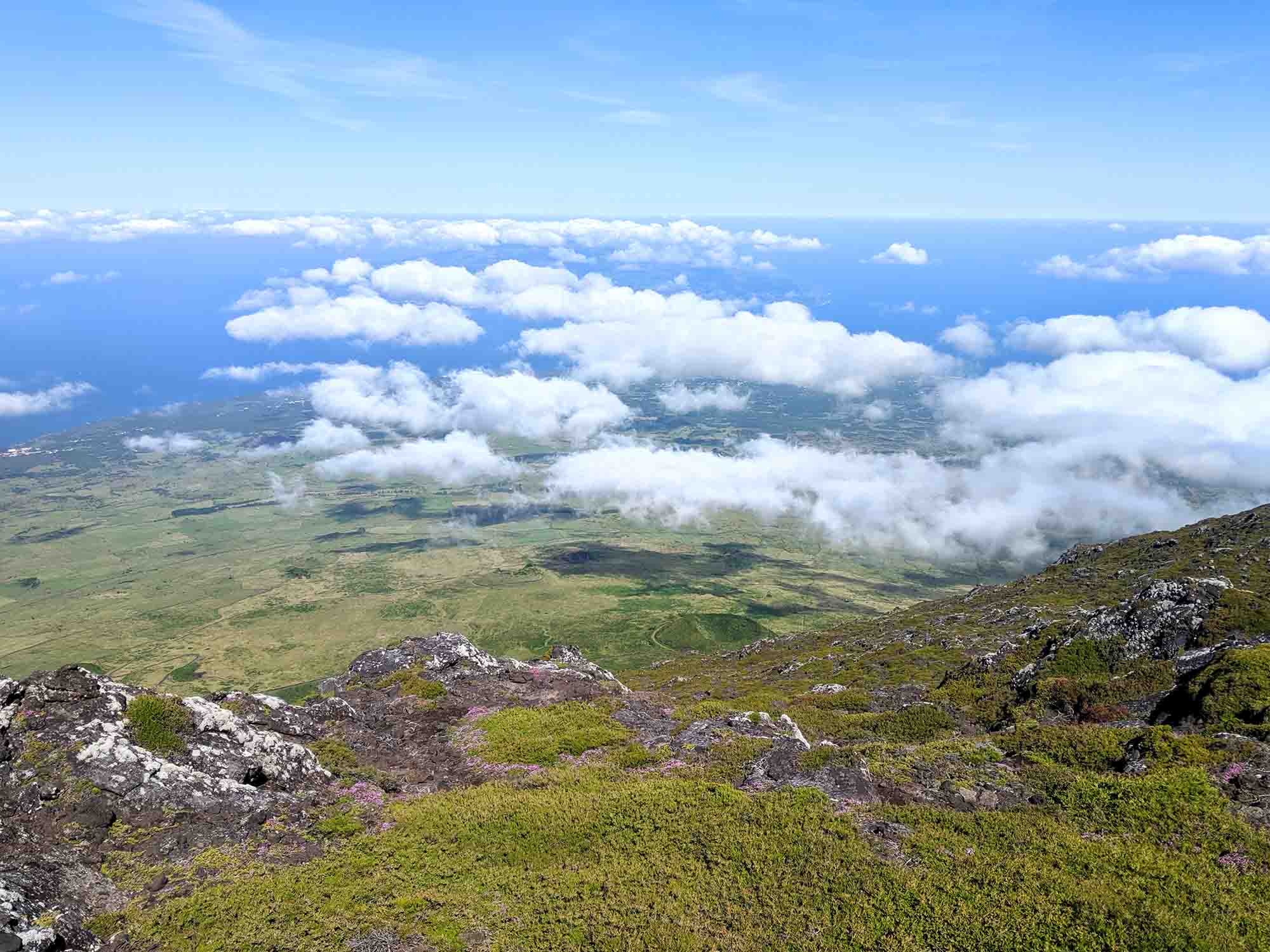 Climbing Pico is actually made up of two mountains: Pico (which was once a volcano) and a very small “mountain” inside the crater that’s called “Piquinho.” Although Piquinho is technically an extra mountain, nobody stops at the crater: pretty much everyone climbs up Piquinho as well (10-15 minutes of scrambling).

How hard is it? 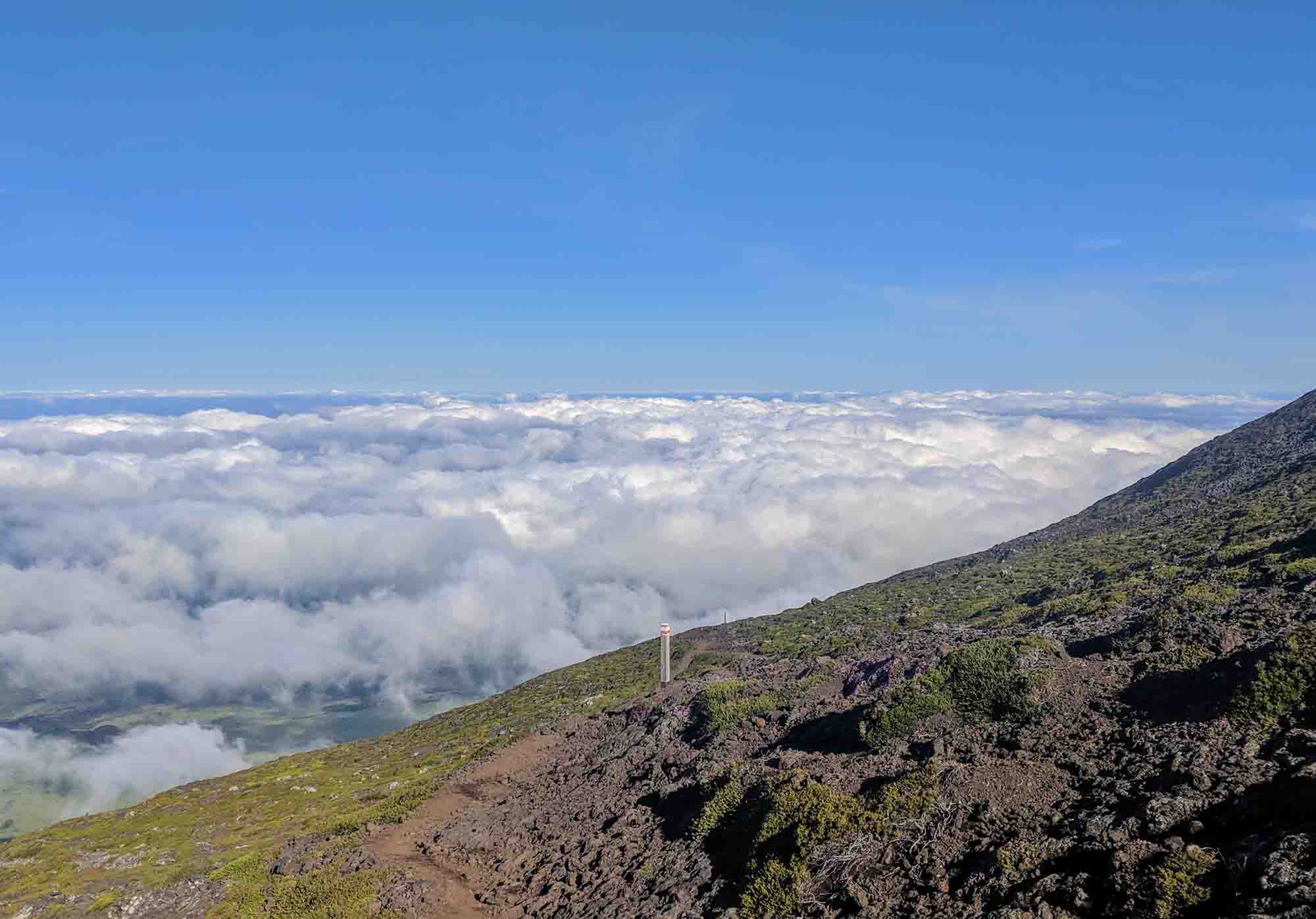 Pico is a pretty tough climb. The best way I can describe it is that it’s like climbing a really long set of stairs for about 3 hours and then going all the way back down again.

Apparently a 3rd of people don’t make it up Pico. Some of this will be due to people not being fit enough, but the majority is probably due to people being unlucky with the weather. The weather in The Azores changes a lot and it obviously can affect you a lot more when you’re on the side of a mountain.

Most people take around 7 hours total to complete it which, on the flat, would be quite a lot of walking. I was able to do it in around 5 hours, but I had been doing a long of walking in the months leading up to it (around 10-15 km per day).

Going down was definitely harder mainly because the ground is often made up of small, loose lava rocks (called biscoitos) and then even finer soil which was almost like sand. The sand-like ground was the hardest, and I fell on my arse at least once. 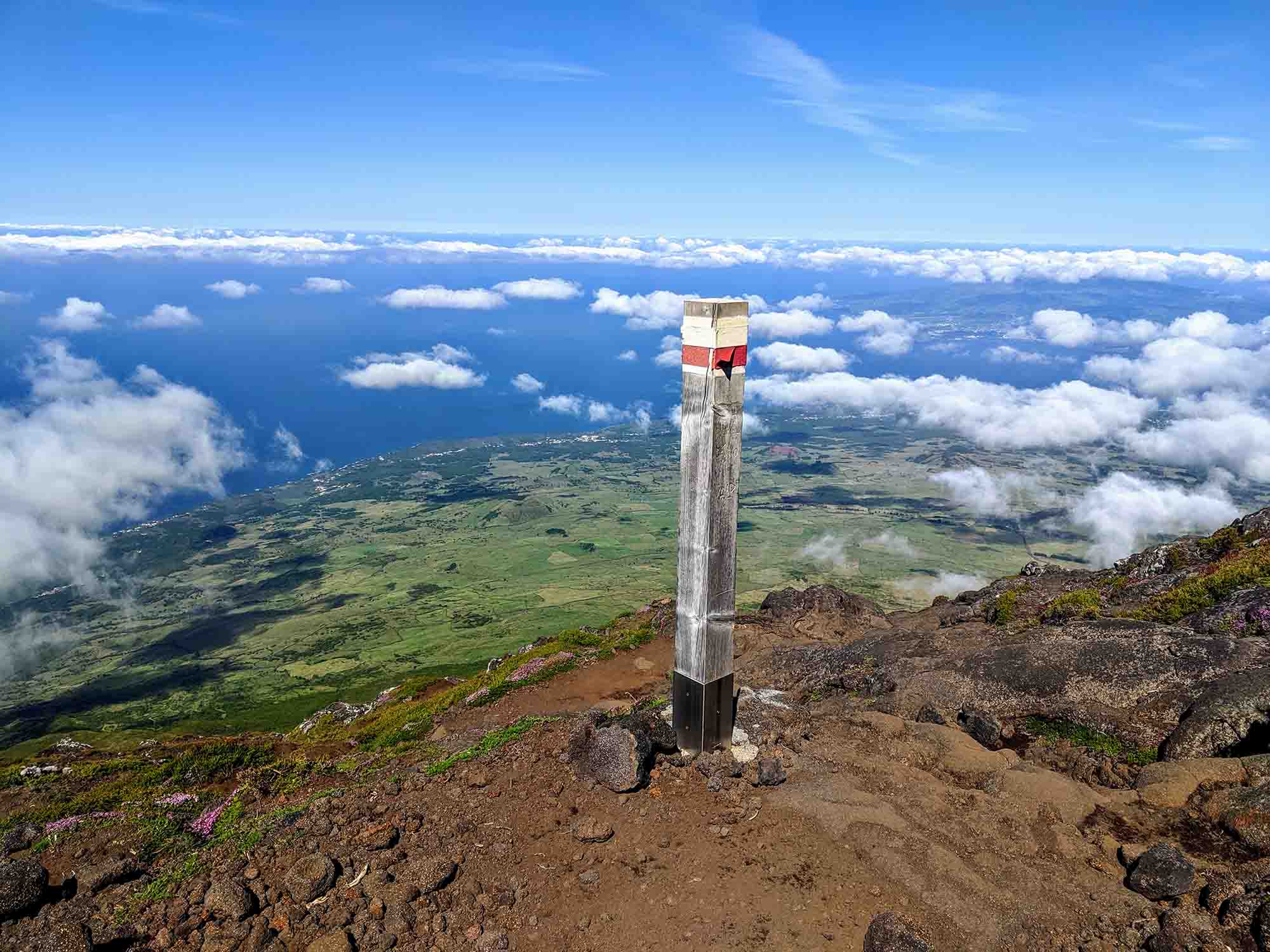 If visibility is good, you won’t get lost. Unnumbered poles mark the way up, and they’re always easy to spot. There will probably also be plenty of other people climbing at the same time as well.

Do I need a guide?

I know this because each article had a disclaimer at the end saying that the climb was “sponsored” or “done in collaboration with” XYZ tour company, but of course it didn’t “influence their opinions”. I’m not saying they’re biased or even wrong – having a guide is probably a good idea – but I think it’s wrong to say that you absolutely must have one.

There are a few reasons to get a guide:

I think a guide would be a good idea if you’re not a confident climber or if the weather conditions are bad, for example. Having a guide also means that you’ll get picked up from your accommodation and dropped back and, given that your legs will feel like jelly after, that might be a good enough reason in itself.

Being honest, I was actually slightly nervous going into the mountain house as I expected to be told that it was unsafe to go up alone. What I actually found was that plenty of people were doing it without a guide. In fact, I found plenty of families (Germans mainly) who were climbing it with their children (and without a guide). Clearly the articles about climbing Pico that are written in German are very different to the ones written in English.

If you do want to do it with a guide, several companies on Pico offer this with prices ranging from around €50-70, although some include the entrance fee so it works out the same.

Should I climb in the day or at night?

Most people climb Pico early in the day like I did, but there are actually three ways that you can climb Pico.

Although I climbed Pico during the day (and in good weather) without a guide, I would probably get a guide for a night or overnight climb. There are plenty of reasons for this, but one would be for safety and the other would be for equipment. If you’re climbing during the night, you’ll need headlamps and if you’re staying overnight, you’ll need a tent and a sleeping bag.

Buying a tent and a sleeping bag is going to work out quite expensive, so it probably makes more sense to go with a guide.

Here’s a list of things that you might want to consider packing for Pico. Some of these I had, and some I was I’d had.

Note: There’s a Sports Zone near Madalena (map) if you need any of these things. There’s also a Decathlon on São Miguel, if you’re visiting there first.

Supermarkets on Pico were pretty basic (and expensive), so it was hard to make a decent packed lunch. I settled on peanut butter sandwiches in the end, along with nuts, chocolate, and fruit, but the sandwiches were quite dry. Maybe I should have done the American thing and added some jam (jelly) as well.

Supermarkets close quite early on Pico and probably won’t be open in the morning, so be sure to get your shopping done in advance.

There isn’t much accommodation near the starting point. The nearest place to stay that I found was this cottage on Airbnb.

Both of those properties are near Madalena and next to the EN3 road, which is the best road for getting up to Casa da Montanha. I stayed in São Caetano, which looked closer to Casa da Montanha but the road up was so bad that it actually took me longer to get there than if I’d stayed in Madalena.

What to do the day before

What to do on the day

It is possible to climb Pico as a daytrip from Faial. The first ferry is normally around 7:30 am, which isn’t as early as most people would like it, but it’s usually still early enough to get there before any major queueing begins.

Once you factor in the ferry from Horta to Madalena (30 minutes) and the taxi or ride with a guide from Madalena to the Casa da Montanha (20-30 minutes), it’s going to be around 08:30 am before you can start.

Renting a car or scooter in Madalena is also an option, but that often means filling out paperwork which will take at least 10-15 minutes. Alternatively, you could also rent the vehicle in Faial and take it on the ferry.

Given that most people take around 7 hours, this would mean that you finish around 15:30. The last ferry is usually much later, so you shouldn’t be in a rush.

Tip: make sure you have the number of a taxi driver or a way of getting back to Madalena in time for your ferry back to Faial.