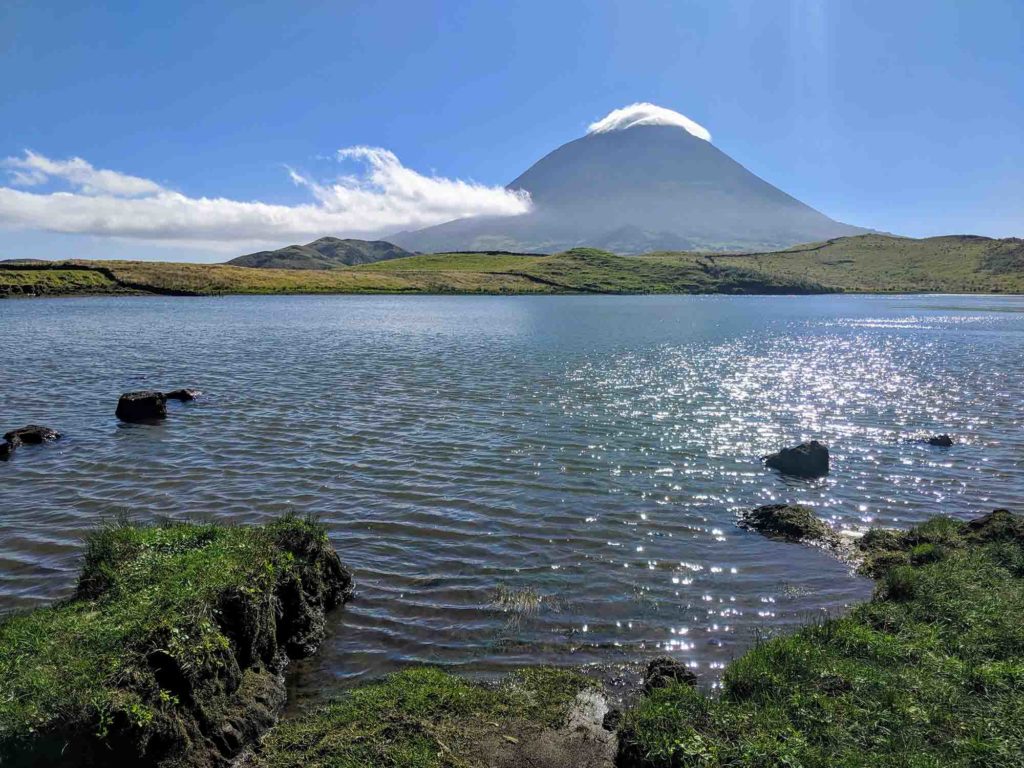 Famous for wine, whales, and its mountain, Pico is becoming an ever-increasingly popular island to visit on The Azores.

It’s also relatively easy to get to. It may not have direct flights from mainland Portugal yet, but the nearby Island of Faial does and you can get connecting flights from many of the other islands. As part of the “Azores Triangle,” it’s also easy to get to by ferry from São Jorge as well as Faial.

Plan to spend a few days here. While you can cover wine and whale watching in a day, you’ll most likely need another entire day if you plan to climb Mount Pico. Unfortunately, weather conditions can change dramatically so it’s always good to give yourself a day or two extra if you can.

Pico is a reasonably small island, and very easy to get around by car: it takes just under two hours to drive around the edge of the entire island.

As Madalena is the largest town, and the place with the most restaurants and bars, many people chose to stay here. Accommodation can often be more expensive here. However, If you rent a car, you have the luxury of being able to stay almost anywhere on the island.

That said, it’s probably best to stay on the left-hand side (Madalena side) of the island rather than on the far right-hand side as this is where most of the attractions are.

Attractions to keep in mind when choosing where you’ll stay:

If you’re visiting Pico and don’t plan on renting a car, it’s probably best to stay in Madalena as this is where you’ll find the most options for tours and taxis. If you’ve rented a car, you’ll obviously have a lot more flexibility.

Pico Airport is situated around 12km outside of Madalena, the largest town on Pico, and around 14 km from São Roque do Pico. The airport is quite small and only has direct flights to Lajes International Airport on Terceira and Ponta Delgada Airport on São Miguel Island. Horta Airport on the neighbouring island of Faial is bigger and has more flights, including direct flights to mainland Portugal.

There are a small handful of car rental companies at Pico Airport. Some companies based in nearby Madalena may be willing to bring the car to the airport, or you could get a taxi there, if you can’t find what you need at the airport.

There is a bus service, which goes into Madalena. However, services are quite infrequent and so you’ll probably need to take a taxi. As of 2020, expect to pay around €15 for a taxi from Pico Airport to Madalena and around €18 for a taxi from the airport to São Roque.

Most people visiting Pico will arrive by ferry, either from Faial Island or São Jorge island.

As it’s bigger, you’ll probably find more car rental and accommodation options in Madalena so it’s probably best to arrive here. It may be worth looking at both options, though.

Although there are other things to see and do, particularly hiking, Pico is known for three main things: whales, wine, and its mountain.

While you can go whale watching on many of the Azores Islands, Pico is one of the best places to do it with one of the highest success rates of seeing whales (and dolphins).

Book a group tour or a hire an entire boat

Mount Pico is Portugal’s highest mountain and, as a former volcano, it’s one of the most unique mountains that you’ll climb. It’s a bit of a trek, but it’s definitely worth it. Read more

Pico is famous for its not only unique way of growing wines, but the quality of wines that it produces. It’s not only worth tasting Pico wines while you’re here, but also visiting some of the vineyards as well. Read more

You’ll find bifanas, a simple garlicky pork sandwich, all over Portugal and there are two main styles or recipes of bifana: bifanas à moda do Porto and bifanas à moda de Vendas Novas. But, there’s a third style of making of bifanas and this one can only really be found in Pico (and actually it can be quite hard to find on Pico).

Although Pico bifanas taste very similar to the bifanas à moda de Vendas Novas, they have their own unique twist: they’re made from tuna rather than pork. In reality, they don’t taste that different to a normal Vendas Novas bifana but it’s fun to try one anyway.

Obviously, the main thing to drink while you’re on Pico Island is wine.

Pico is gradually becoming famous for its wine, not just for the unique vineyards in which it’s produced (although they are definitely interesting) but also for the quality of the wine, particularly white wine.

Read more about wine from Pico

Portugal is famous for dessert wines, particularly Port but also Madeira and also Moscatel, but one dessert wine that hasn’t really picked up an audience in Portugal or internationally is Vinho Licoroso.

It wasn’t always that way. During the 18th and 19th Centuries, Vinho Licoroso was popular with nobility all over the world and even has a mention in Tolstoy’s War and Peace.

Has it been overlooked? You’ll need to try a glass to decide.

As well as regional dishes from Pico, you may also find some other Azorean dishes and dishes from mainland Portugal as well.

Just because you’re in The Azores, that doesn’t mean that you should only eat Azorean food, however, you may struggle to find these dishes anywhere else in the world.

View a guide to food from The Azores

View a guide to food from all over Portugal

Getting around The Azores without a car is very difficult and it’s highly recommended that you rent a car when you visit Pico. Renting a car can be expensive on Pico, but it’s a necessary expense.

You can rent a car at Pico Airport, if you’re flying into Pico, or at one of the two ferry ports, Madalena and São Roque do Pico. Madalena is the bigger port, and the largest city on the island, so you’ll find more car rental options here.

If you can’t find what you’re looking for on Pico, it is possible to rent a car on Faial or São Jorge and bring it over on the ferry.

Note: Some of the car rental companies close at normal office hours (e.g. 6 pm). Be sure to double-check check the company will be open if you’re getting a late ferry into Pico.

Pico Island does have bus services, however, services are infrequent and it can be very difficult to explore the island by bus. While you will be able to use the bus to visit some towns on the island, you will probably end up using taxis a lot more.

Taxis are one of the main ways that people who don’t drive get around The Azores. Most of the taxis have fixed prices for trips to the airport, between towns, to the start of a walk, etc.

Note: If you’re riding a scooter on Pico, check that you’re actually covered if you have an accident. Many people assume that a full car licence (even with an international driving licence add-on) means that they can legally ride scooters, but this isn’t always the case. If it isn’t the case, it would mean that your travel medical insurance might not cover you in the event of an accident.

Hitchhiking doesn’t seem to be very common in The Azores. It’s definitely something you can try on Pico: there are no motorways and often there’s just one main road, so that’ll make things easier, but don’t expect to see many other hitchhikers or expect cars to stop very often.

From Pico Airport, there are direct flights to Lajes International Airport on Terceira and Ponta Delgada Airport on São Miguel Island. You can get to all of the other islands, but it’ll involve a stopover on either Terceira or São Miguel.

Note: Horta Airport on Faial has more inter-island flights as well as direct flights to mainland Portugal (mainly Lisbon). Faial is only a 30-minute ferry ride from Pico (and then a taxi/bus ride to the airport).