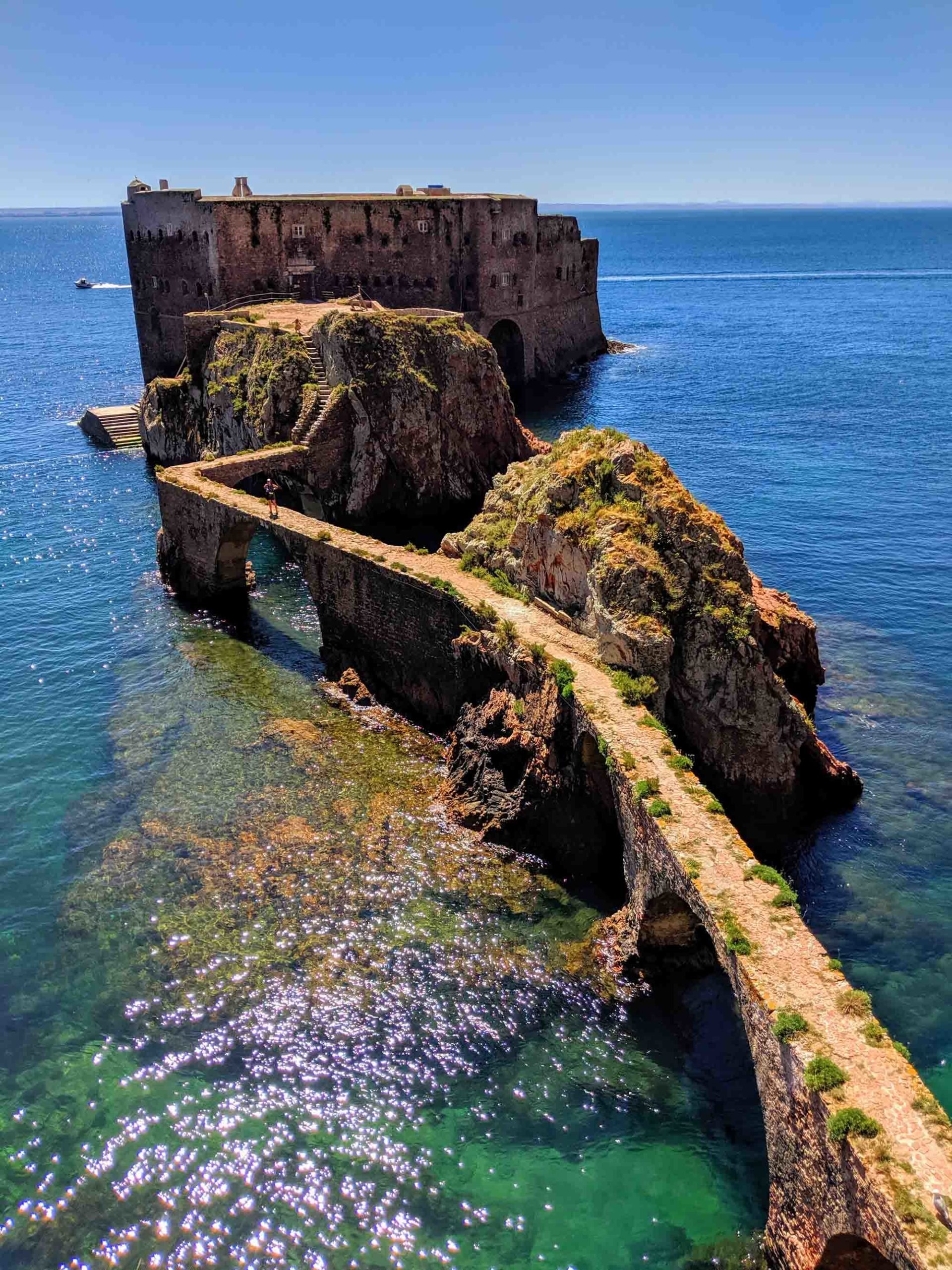 The Berlengas archipelago is a small group of islands located roughly 10-15 km off the Portuguese coast, although many people use the word to refer to the main island: Berlenga Grande.

The archipelago is a protected reserve, home to all kinds of creatures and foliage but especially seagulls and lizards, and tourists are only able to visit Berlenga Grande.

Berlenga Grande is famous for its iconic fortress, which is now a cheap bed and breakfast (see below). A number of Peniche-based companies offer boat tours to Berlenga Grande, and the trip normally takes around 4 hours or so.

Several companies in Peniche offer boat tours to and from Berlengas. There isn’t a huge difference between most of the companies: each one offers a journey to and from the island as the basic package and then slightly more expensive tickets that include things like a boat tour of the caves, a guided tour of the island’s attractions, and snorkeling.

Some companies offer additional activities like an introduction to scuba diving (Feeling Berlenga, Berlengatur) or kayaking (Julius Cruises), but most offer more or less the same package.

Most of these companies have a ticket office at the marina in Peniche. Tickets are slightly cheaper if they’re reserved in advance, which you can do on most of their websites. Otherwise, head down to the ticket offices to buy your tickets.

If you’re going to be coming from Lisbon, you can also book an entire tour to take you from Lisbon to the island on either Get Your Guide or Viator.

Alternatively, take the first bus from Sete Rios station and it should get you in on time. Bus tickets are available on Rede Expressos.

This is becoming an increasingly popular activity, particularly in the summer months and particularly on weekends. If you’re planning on visiting during those times, it’s definitely a good idea to book in advance. As this is a protected area, the government will limit the number of tourists per day.

If you get seasick easily, you’re probably wondering what the ride is like. It can be a little bumpy, especially in the inflatable boats which tend to bounce on the waves. You may find it easier to go with a company that uses a catamaran like Berlengatur.com.

Things to see & do on Berlengas

The main thing to do on Berlengas is visit the incredibly photogenic Fort of São João Baptista, which is situated off the coast and accessible by a beautiful stone bridge.

The lighthouse, on the trail that takes you to the fortress, is also worth taking a look at, and there are plenty of other beautiful viewpoints along the way too.

The island’s main public beach is also quite idyllic, and definitely somewhere to go for a swim and relax in the sun.

If you want to do anything else, for example an introduction to scuba diving or to go snorkelling, you’ll need to book it in advance with one of the Berlengas tour companies (listed above). It’s not possible to organise anything once you’re on the island.

There are two restaurants on the island, Mar e Sol & the restaurant inside the São João Baptista Fortress Hotel (when it’s open). As expected, the restaurants aren’t particularly well-reviewed and are considered to be a bit pricey.

Most tours on last for around 4 hours, but it’s still a good idea to bring food and drink with you (especially water).

Most people that visit Berlengas do so as part of a half day or day trip, but it’s actually possible to stay on the island: either by camping or in the Fortress of São João Baptista (now a hotel and restaurant).

Construction of this fortress began in 1502, under the orders of King Manuel of Portugal and, during its existence, the fortress has served as a monastery, a military base, and now a basic hotel offering bed & breakfast and an on-site restaurant.

Surprisingly, given its location, the hotel isn’t particularly expensive to stay at, but advanced booking is definitely recommended as it does get booked up fast. To book a stay at the hotel, you’ll need to call Associação Amigos da Berlenga on (+351) 262 750 244.

There are several allocated camping places for tents, which all have incredible views that look over the bay below. There are facilities nearby (toilets and the Mar & Sol restaurant), but facilities are pretty limited apart from that so you’ll need to bring provisions with you. A pair of earplugs might be wise as well, as the seagulls that live nearby can be noisy.

During the summer months, this camping spot is very popular so be sure to book in advance.

The “campsite” is run by the Peniche Tourism Office on Rua Alexandre Herculano in Peniche. To make a booking, e-mail [email protected] or phone (+351) 262 789 571. Payment is normally made by bank transfer and, if you don’t have a Euro bank account, Transferwise is normally the cheapest way to send money to a Portuguese bank account.

The island’s main restaurant also offers double rooms for rent, which are of a higher quality than either the fortress or the camping. Bookings can be made by telephone: (+351) 262 750 331.

Alternatively, you could stay in Peniche and take a day trip which is what most people do.