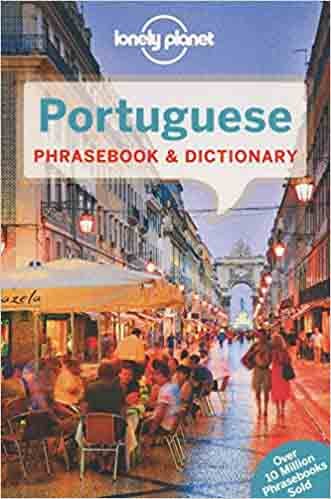 If you’re visiting Portugal, or you’re beginning to learn Portuguese, a Portuguese phrasebook will come in handy. English is spoken in Portugal, particularly in urban areas and amongst younger generations, but that isn’t always the case. And, it’s much more fun (and polite) to learn some basic Portuguese.

The Rough Guide Phrasebook: Portuguese covers topics like asking for directions, checking into a hotel, or asking when the train leaves. Although some readers have complained that this is quite a short book, it covers more than 5,000 words and phrases — more than most Portuguese learners ever end up learning, and more than most of the other phrasebooks on this list.

The real benefit of this book is that is comes with free audio downloads, which helps to ensure that you get the pronunciation right.

50 Languages offers a free app, web app, or set of MP3s that cover pretty much all of the essential travel phrases that you need for visiting Portuguese. In fact, it goes a little deeper than most of the phrasebooks and is a really good starting place for learning Portuguese. Oh, and it’s free!

If you like Memrise, there’s also a supporting Memrise course.

The Lonely Planet Portuguese Phrasebook & Dictionary is probably the best-selling Portuguese phrasebook. It contains essential travel phrases, a menu decoder, and a 3500-word two-way dictionary. It has vocabulary and phrases for common situations like eating out, sightseeing, and business, as well as phrases for emergency situations. Unfortunately, it lacks a CD or MP3 component where you can listen to the words being pronounced.

With only three hours of audio, Collins Easy Learning Portuguese Audio Course is a fairly simple course that covers the essentials that you need for getting by in Portugal. It’s more of a short course to prepare you for a trip to Portugal, rather than either a course in Portuguese or a travel phrasebook.

The Collins Gem Portuguese Phrasebook and Dictionary is a handy pocket-sized phrasebook and dictionary that covers thousands of essential phrases that you can use in situations like booking a hotel or choosing a bottle of wine. It also has a menu translator so you’ll always know what you’re ordering.

Unfortunately, while it’s a fantastic size for keeping on you, it lacks the audio features that The Rough Guide Phrasebook comes with.

WikiTravel has a free Portuguese phrasebook, which focuses on European and African Portuguese. It contains a few hundred phrases and useful words for situations that you might find yourself in. This isn’t quite as many as some of the other phrasebooks, which is its first downfall. The second is that it’s quite hard to navigate and, unless you have internet on your phone, take with you.

The BBC Portuguese Phrase Book and Dictionary is available in both paperback and Kindle format. If you don’t have a Kindle, you can also download the Kindle app to your phone or iPad. For phrasebooks and reference books, the app can sometimes be easier to use than the Kindle.

Unfortunately this book lacks an audio component, which is fairly essential to getting Portuguese pronunciation right.

The DK Portuguese Phrasebook covers essential Portuguese phrases that you can use while shopping, at the doctor’s, or at your hotel. The book comes with an audio CD that’s 70 minutes long and has a small section on Portuguese pronunciation.

Earworms’ Rapid Portuguese is a very unusual audio course that has combines audio lessons with a background music track. The makers of the course, Earworms mbt(c), describe it as a revolutionary accelerated technique so maybe there’s some science to it. Volume 1 covers tourist phrases (e.g. a beer please) while Volume 2 gets you talking about yourself.

You can listen to a sample on Amazon.

4 thoughts on “8 Portuguese phrasebooks for your trip to Portugal”