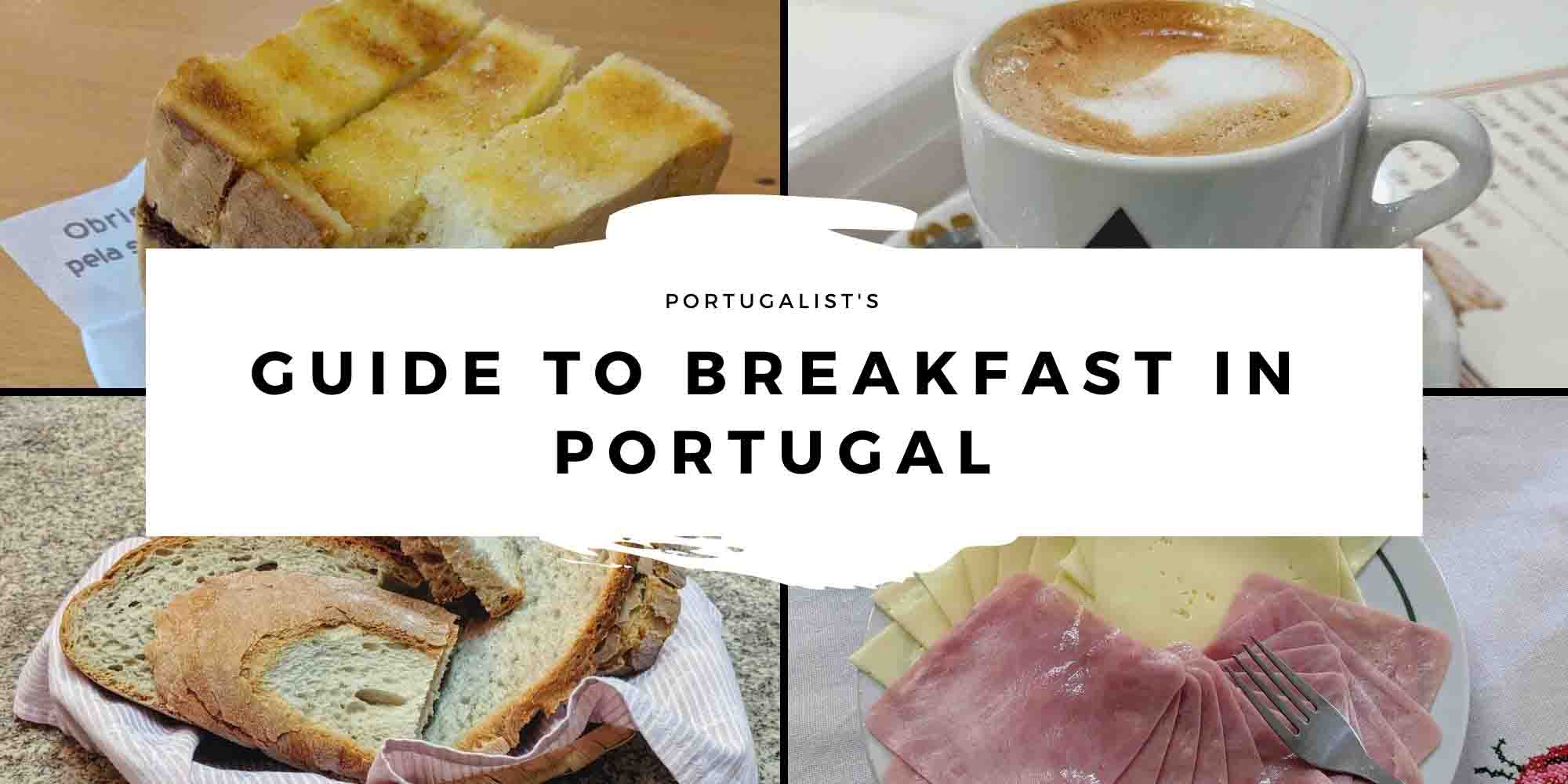 While there’s no set “Portuguese Breakfast” like there is an “English Breakfast” or “German Breakfast,” there is a theme to what the Portuguese eat for breakfast.

And, it’s not pastéis de nata. They might feature later in the morning at around 11 am for lanche da manhã – although it’s just as likely to be another Portuguese cake or pastry as a pastel de nata – but they’re rarely the first thing that the Portuguese eat.

The most common items you’ll find in a Portuguese breakfast are: bread, sliced cheese, sliced ham, bread, jam, and a milky coffee. Sometimes it’s just toast without the ham and cheese, but the common denominators are almost always bread and a milky coffee like a galão or a meia de leite.

The bread comes in different formats: it might be sliced, toasted, a bread roll, or maybe even a croissant. The ham and cheese are always the same: sliced “flamengo” cheese, which is Edam cheese, and sliced ham.

I’ve travelled all over Portugal, which varies considerably in terms of climate, geography, and culture. The breakfast almost never changes, though.

This is what the Portuguese typically eat in a café rather than at home. What people eat at home is often slightly different: like everywhere else, many people have a rushed breakfast of just toast and coffee or maybe cereal in the morning.

Others, particularly the younger generations, will swap the bread, processed ham, and processed cheese for healthier items like muesli, fruit, eggs, etc.

What to order in a café

Cafés in Portugal don’t usually have a breakfast menu, but if you want to eat a typically Portuguese breakfast, here are a few suggestions for what to order.

While the espresso (um café) is the type of coffee that’s most commonly drunk in Portugal, in the morning, milky coffees are more common. The two most common types are a galão or a meia de leite.

This is essentially a large glass of milk with an espresso shot in it. It’s quite a long coffee, so it’s good if you want something to savour while you have your toast or cake.

This coffee is similar to a latte, although not identical: a lot of people order this expecting a latte are feel that it’s not as good.

It’s hard to get the equivalent of an Americano in Portugal, which is a pain point for anyone that likes a large black coffee in the morning. Although Abatanados are basically the same – espresso and hot water – they’re also not quite the same, and that can take some getting used to.

If you’re looking for a black coffee that’s bigger than an espresso, go for this one. It’s worth saying “abatanado chia” which means full so that you definitely get a full cup – the Portuguese seem to like as little hot water in their coffee as possible.

Want more information about Portuguese coffee or a list of other coffees that you could order? Take a look at this list of all the different types of coffee that you can order in Portugal.

It’s quite common to go into a café in the morning and just order toast, usually with butter but it could be with jam or something else instead. This might seem a bit basic to outsiders, but those thick slices of bread are really very addictive.

One way that Portugal differs from other countries is that people often have what most non-Portuguese people would class as a lunchtime sandwich for breakfast. This is a ham or sliced cheese sandwich, or both, and it usually comes in either a bread roll or a savoury Portuguese croissant. If it comes in sliced pan, it’s often toasted.

Some common types include:

It’s quite common to put ham and cheese inside a sweet bread like Pão de Deus or in a Portuguese croissant. This combination of the sweet and the savoury might be a little unusual depending on where you come from, but it works and it’s worth trying.

Although cakes and pastries aren’t typically eaten first thing, don’t feel you have to stick to bread, ham, and cheese. You can get that almost anywhere, but what you probably can’t get are the many different cakes and pastries that you’ll find in a Portuguese pastelaria.

Otherwise, it’s common to eat a cake or pastry at around 11 am (lanche da manhã). Pastéis de nata are one option, but they’re definitely not the only cakes in Portugal – see this list of Portuguese cakes that you should try before you die.

Portugal is an orange-growing country, particularly in the Algarve in the south of country, and you can get freshly squeezed orange juice in most cafés in Portugal. Try it: it’s really good.

If you go into a café in the morning, you might see someone having a small beer (usually just a mini) or, particularly with older Portuguese people, a glass of brandy.

This is something you see more in rural areas, and it doesn’t necessarily mean the person is an alcoholic. They’re not usually trying to get drunk either: usually they’ll have coffee and an alcoholic drink (apparently in Portugal one cancels the other one out).

Of course, this logic means that you’re back to square one so now you need to stop for another coffee. It’s all a part of that slow pace of life Portugal is famous for.

Breakfast in a hotel in Portugal varies depending on the type of hotel that you’re staying in. Newer hotels or more boutique hotels will often offer things like granola, muesli, homemade cakes, a variety of cheeses, and more. Chain hotels will typically offer a continental breakfast.

Traditional hotels, however, will mainly just offer the bread, ham, and cheese. There’s almost never fruit, which I know is something that many visitors wish there was.

The Portuguese hotel breakfast is fine the first day or two, but it quickly gets very boring. I often travel for weeks at a time, and usually avoid the breakfast if I’m staying in a hotel – I certainly don’t pay extra to have it included. I much prefer to go to a pastelaria, grab a piece of fruit, or just wait until lunchtime.

What boggles my mind is just how bad the coffee is in a Portuguese hotel breakfast. The Portuguese love their coffee and usually make very good coffee, but not in hotels or guesthouses. It’s so bad that I usually end up leaving it or discretely chucking it away. If you add milk, it’s just about possible to drink it but it’s usually still pretty horrible.

Now, the coffee you get in a café is made in an espresso machine. The coffee served in hotels, guesthouses, and B&Bs is usually made using a drip coffee machine as it needs to serve multiple people.

For some strange reason, it seems that nobody in Portugal knows (or cares) about making coffee in a drip machine, French press, or anything other than an espresso machine.

Do the Portuguese eat brunch?

While there are now a lot of brunch places – as in places with dishes like eggs benedict and pancakes – in Lisbon and Porto, brunch isn’t typically Portuguese (although these places are popular with younger Portuguese generations).

Where can I try an authentic Portuguese breakfast?

If you’re in Portugal, you won’t have to look very hard to find a traditional café or pastelaria. You’ll find one on every street in any Portuguese town or city.

Where can I find speciality coffee in Portugal?

There are plenty of hipster cafés in Lisbon, Porto, and also some towns on the Algarve that serve speciality coffees like flat whites, lattes, and chemex coffees but, outside of the big cities, it’s very unlikely that you’ll find these coffees.

Which cakes are eaten in the morning?

Breakfast (which takes place at around 8 am) usually focuses on bread of some kind rather than cakes. There’s nothing to stop you ordering any cake or pastry, of course, but it’s more typical to eat these at around 11 am.