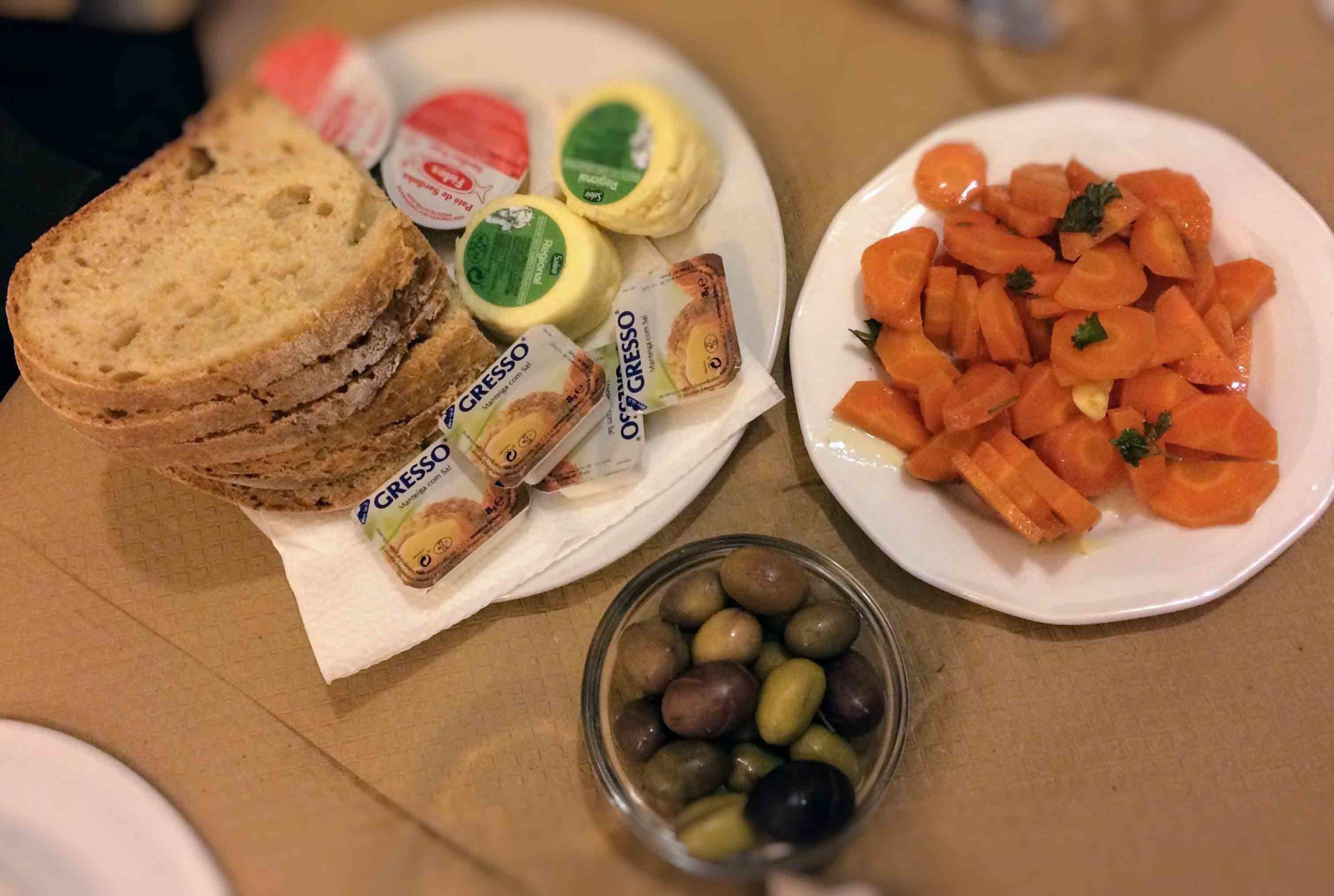 Sit down at a restaurant in Portugal and within a few minutes the waiter will normally bring over bread, and maybe also some olives, tuna or sardine paste, small cheeses, Algarve carrots (in the Algarve), and croquettes like pastéis de bacalhau as well. It depends where you are: usually it’s just a basket of bread and maybe some mini tubs of butter or sardine paste.

This is known as the couvert. It’s not free, but it’s usually not expensive. It is, however, very confusing for first time visitors to Portugal (and even those that have been coming to Portugal for a while).

Technically, the waiter is supposed to ask you if you want the couvert or not but, even though this rule has been in place for several years, most just put the bread on the table without saying anything. In fairness to the waiters, most people in Portugal do want the couvert and, if they don’t want it they just say.

Of course, anyone visiting Portugal for the first time won’t know what’s going on. Many assume it’s free and then feel scammed when they see it on their bill at the end.

It’s not a scam and, if it was, it wouldn’t be a very ambitious one: most places just charge a few Euros for the couvert. But, because the waiters never say anything when they bring it over, many people do feel ripped off when they see it on their bill.

How much does the couvert cost?

A couvert containing bread, butter, and sardine paste, for example, will probably come to less than €5 and that’s for everyone at the table. Even if it includes more expensive items like meat and cheese, it should still come to less than €10 – much cheaper than everyone at the table ordering a starter. Note: this is for a normal traditional Portuguese restaurant and prices may be higher in higher end restaurants.

Not sure how much the couvert is likely to cost? Have a look in the menu. Everything will be listed, normally individually although occasionally the couvert has a per person price. As mentioned, basic items like bread and butter are normally inexpensive but it’s also worth checking just to be sure. It’s also worth paying attention to the more expensive items, and deciding whether you want to say no to anything.

Generally, the couvert won’t break the bank but it’s a good habit to check the prices before accepting it especially if you haven’t been to that restaurant before. Most Portuguese restaurants are honest but some places, particularly in touristy areas, will charge more than what’s reasonable for items on the couvert.

You can refuse the couvert (or anything in it)

Legally, you should have been asked whether or not you want the couvert before it’s placed on the table. This doesn’t always happen but, if you don’t want it, all you have to do is say no. While giving you the couvert without asking is illegal, there are even worse consequences for forcing it on you and no restaurant is likely to try this.

As well as cost, some people will refuse the couvert because eating white bread and butter isn’t particularly healthy. If you’re on a diet, or just being sensible, don’t feel like you have to eat the couvert.

Unhappy? Here’s what you can do

If you feel you have been overcharged in any way, the best option is to speak to the waiter first. Most will be very apologetic, and may even just remove the cost of the couvert from the total without you having to complain any further.

As a customer, your next two choices are to either refuse to pay the couvert (but pay everything else) or to put an official complaint in the complaints book (livro de reclamações).

Every business has a complaints book, which is a legal requirement in Portugal. The paperwork involved in processing a complaint is quite a big headache for most businesses, and so almost all of them will be likely to do anything to avoid you writing in the complaints book.

Generally speaking, though, the couvert is not a scam. In fact, it’s actually pretty good value for money.

What do you think about the Portuguese practice of the couvert? Is it a good thing or a bad thing? Share your thoughts or ask a question below.