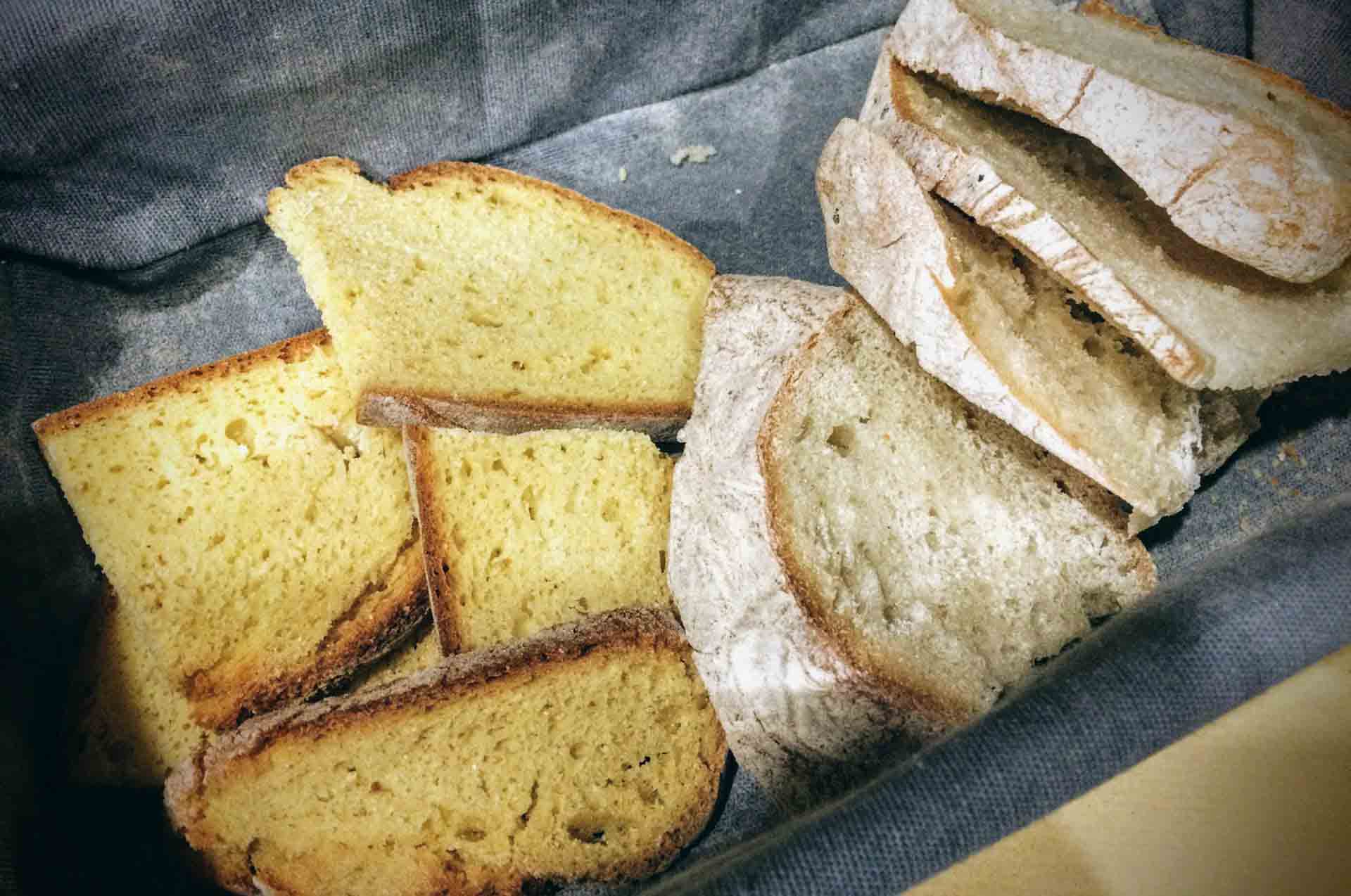 As with most European countries, bread is an integral part of the Portuguese diet. The day usually starts with a bread roll or toast (torrada), and bread is usually included at each major meal and often for the snacks in between meals as well.

The Portuguese love their own breads, but foreigners rarely fall in love with Portuguese breads in quite the same way. Often the breads are dense and chewy, and many visitors end up buying baguettes and other non-Portuguese breads instead. A lot of Portuguese bread is also designed to be eaten the same day, some of it within a couple of hours of being made, and that can be frustrating to those that are used to longer-life bread.

Portugal has some great breads, though, and it’s worth trying a few different types until you find one that you like. Although there are some breads that are available throughout the whole of Portugal, breads are often regional. It’s good to try the different breads when you travel throughout Portugal, but be aware that you may not be able to easily get that bread everywhere in Portugal.

Pão Alentejano or pão de cabeça is a popular regional bread from the Alentejo region of Portugal. It is made from wheat flour and baked in a wood oven, and it’s famous for it’s head or forehead that sits on the top of the loaf.

Pão Alentejano is also used as an ingredient in local Altentejo cooking, particularly in Portuguese dishes like migas (bread-based dumplings) and açorda (a bread-based soup).

Broa de milho or pão de milho is a cornbread that comes from Northern Portugal, and it can also be found in Galicia and parts of Brazil. It’s a great accompaniment to soups like caldo verde, or simply with butter, cheese, or Portuguese cold meats. 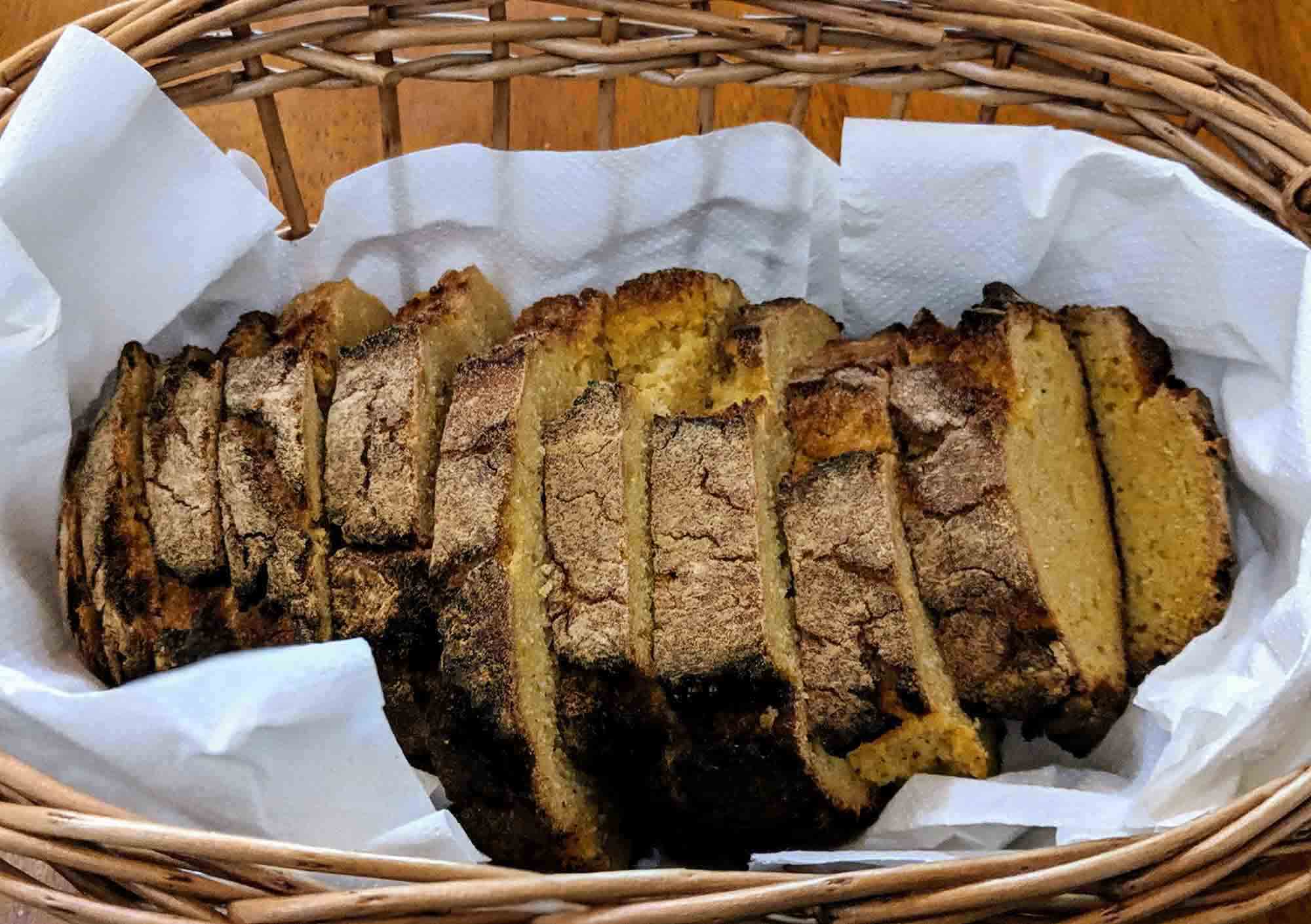 If you’ve never had it before, broa de milho is a little like Irish soda bread. It’s definitely one of the best (if not the best) Portuguese breads out there, and so it’s worth keeping an eye out for it in the supermarket or at your local padaria (bakery).

Like pão alentejano, Broa de milho is also used in some Portuguese dishes for example bacalhau com broa which is bacalhau topped with crumbled broa bread.

Bolo de caco is a type of bread that comes from the island of Madeira, but you can occasionally find it in other parts of Portugal as well. The bread is incredibly soft, which is unusual for Portuguese bread, and very easy to eat.

Bolo de caco is made from flour and sweet potato, which is probably due to the lack of cereals on Madeira. The bread is named after the caco or hot stone that it’s cooked on.

Traditionally it is served with garlic butter, but it’s also used for making sandwiches as well. Typical fillings are ham, cheese, or both, but you can also get fillings like carne em vinho e alho, presunto, steak, or sausages.

If you’re visiting Madeira, be sure to read about some of the other foods you should try there.

Although Portugal has some wonderful cakes and pastries, a lot of Portuguese people like to start their day with torrada com manteiga (toast and butter). This is essentially a sliced bread that’s buttered and cut into strips, but the slice of bread is much thicker than sliced bread is in other countries (at least 2 if not 3 times as thick). 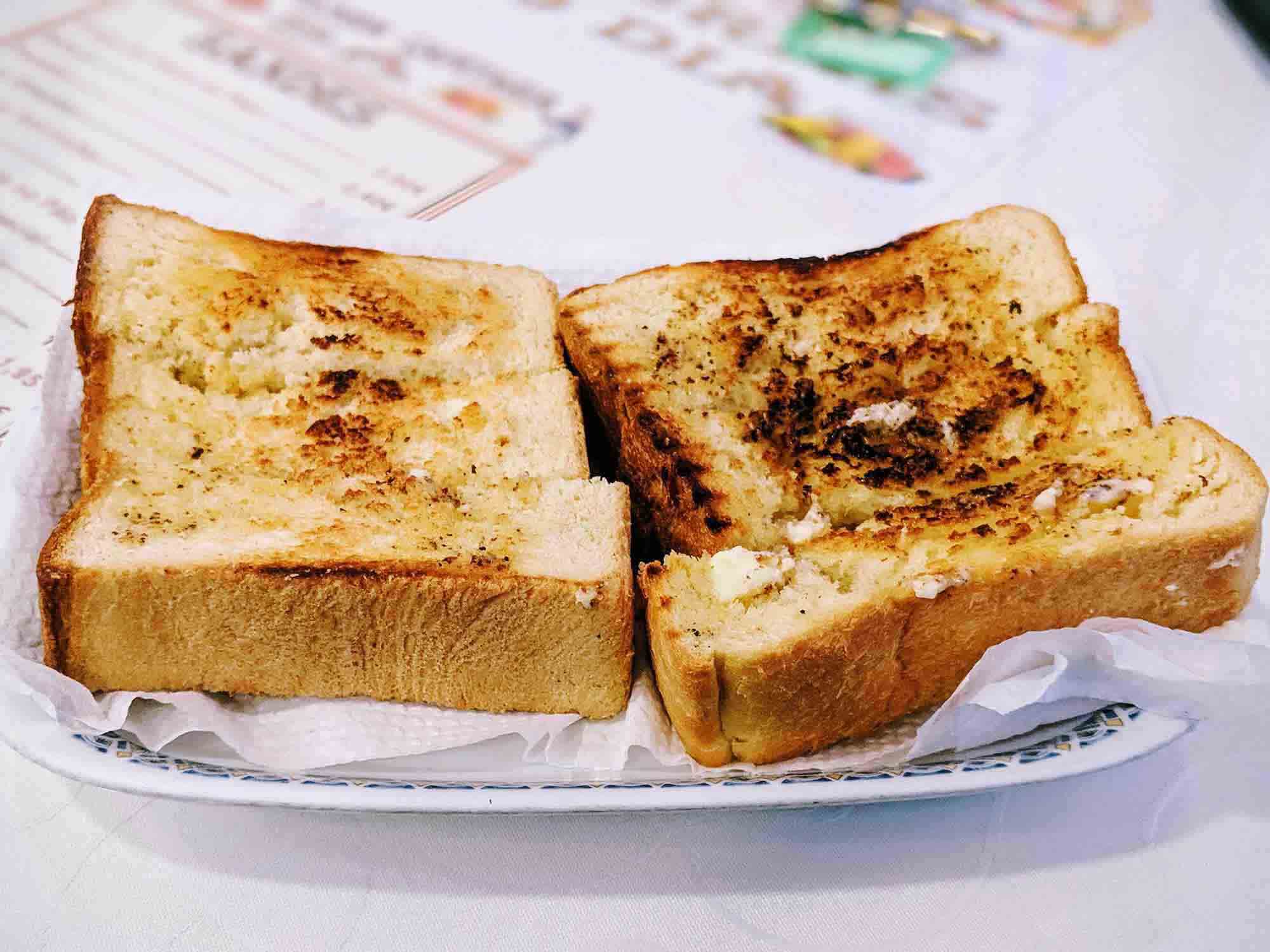 This bread is also used to make fatias douradas or rabanadas, which is the Portuguese equivalent of French toast. This is sometimes served warm, but you’ll also see it served cold and kept in the pastelaria counter next to all of the other cakes. Fatias douradas is is often served as a dessert around Christmas time. 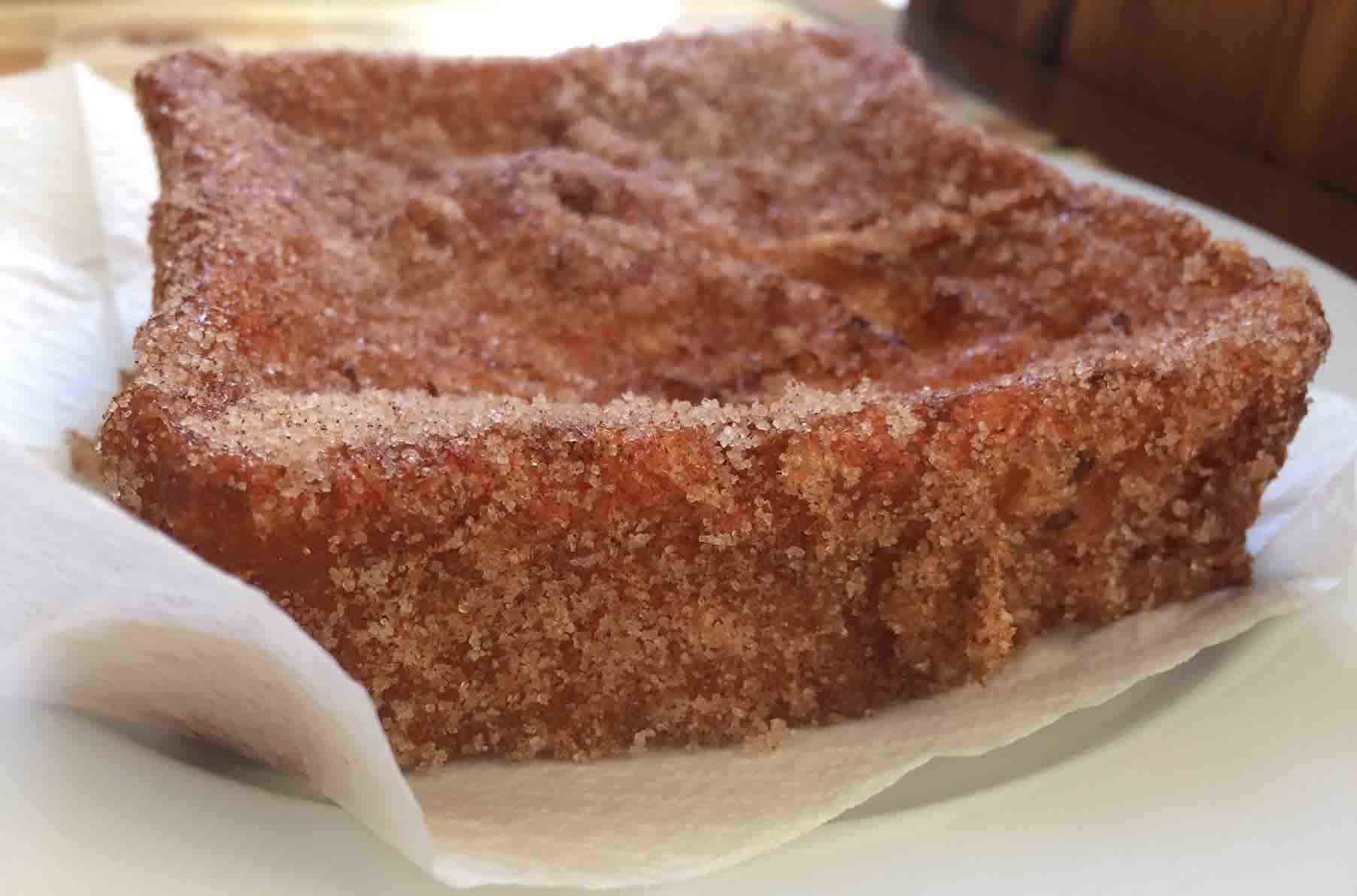 Papo-seco or Carcaça are small bread rolls that are often used in sandwiches, and can also be used to make bifanas and pregos. They’re very simply all-purpose bread rolls, and they’re a staple of the Portuguese diet.

Pão de Mafra is a popular Portuguese bread that originates from Mafra, around 40 km north of Lisbon. Initially the bread was only really eaten in Mafra, but in the 1970s people from Mafra began selling it in Lisbon and its popularity soon spread.

Made from wheat, rye, and lots of water, Pão de mafra is soft on the inside and crusty on the outside and it has a very rustic taste.

Broa de Avintes is a type of bread that’s commonly found around Vila Nova de Gaia near Porto. It’s quite a dark bread, and it’s made from corn and rye flour. Broa de Avintes is quite dense and has a bittersweet taste.

Pão de Centeio is a type of rye bread that’s commonly found in the North of Portugal. Like broa de avintes it can be quite dark, dense, and filling. Although it is traditionally made from just rye flour, some recipes will use other grains like wheat so double check the ingredients if you’re trying to avoid wheat.

Pão de deus means bread of god and, being honest, this is quite a heavenly bread. It is a sweet bread roll with grated shredded coconut on the top, and it can either be eaten as is or used to make a sandwich.

Pão com chouriço is essentially the Portuguese take on a sausage roll: sliced chouriço is placed into bread dough and then baked in the oven. This is often eaten as a snack at around lanche time, which is usually sometime around 4 pm.

A merenda is a soft bread that’s usually filled with cheese, ham, or both. It is often eaten around breakfast or lanche time, and is usually either made with a sweet brioche-style bread or with a flakier puff pastry-style bread.

Bola de carne is another meat-filled pastry. The bread (or cake which it’s more like) is crumbly and sweet and it’s usually stuffed with slices of ham or chouriço in the middle. Sometimes it’s possible to find bola de carne with either chicken or beef in the middle.

Like merendas, this is often eaten at around lanche time but it could also be eaten at breakfast or any other time of the day.

Folar da Páscoa is a brioche-style bread that’s eaten at Easter time and is easily recognisable by the boiled egg that’s baked into the top. The bread can be salty or sweet, and there are a number of different regional takes on the recipe.

The egg is supposed to symbolise the resurrection or rebirth, and it’s also associated with friendship and reconciliation.

Bolo de Ferradura is a horseshoe-shaped bread that’s sometimes given as a gift to wedding guests, but nowadays is mainly just sold at fairs. Different regions of Portugal use different spices to flavour the cakes but some flavours you can expect to find include cinnamon, lemon, or fennel.

Have you tried many Portuguese breads and pastries? Do you have any favourites? Let us know your recommendations and reviews by leaving a comment below.