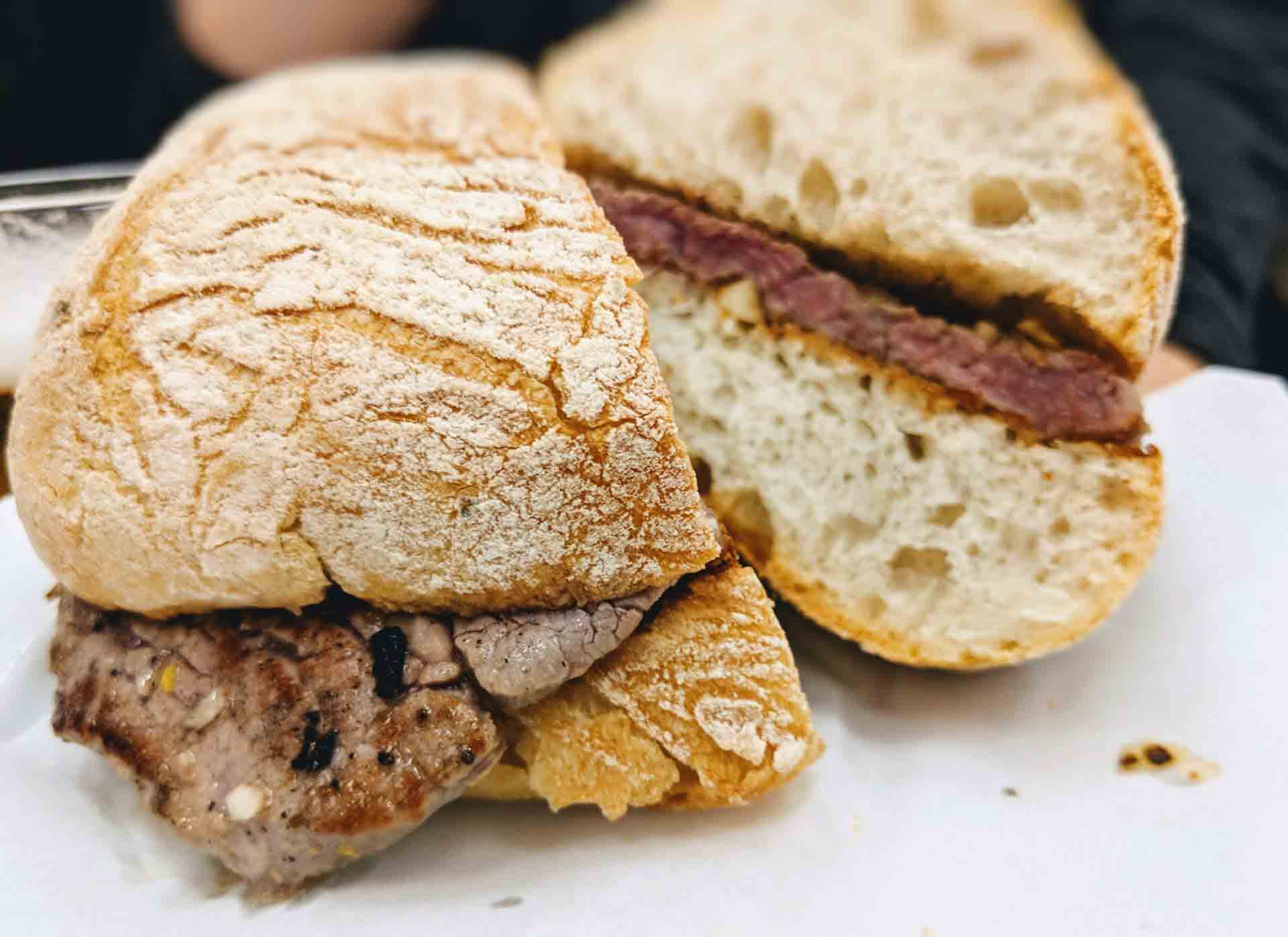 Portuguese cuisine is home to several great sandwiches like the bifana, the sandes de leitão, and the francesinha. The bifana and the francesinha have both been discussed on Portugalist before, and tend to get a lot of attention. The prego, on the other hand, usually takes a bit of a backseat but that doesn’t mean you should pass it over. It’s one of the top Portuguese dishes to try.

What’s so special about this sandwich? This sandwich is eaten both as a snack with a glass of beer, but it’s also eaten for dessert. Yes, that’s correct. In Lisbon, it’s typical to eat this sandwich after a seafood meal of lobster, tiger prawns, crab, or whatever else at your local cervejaria.

It’s bizarre, and nobody really knows why. Some people suggest it’s for soaking up the alcohol that a plate of lobster or tiger prawns won’t be able to, and that could make sense. The thing that’s odd though is that a seafood meal is a very decadent thing and the prego really isn’t. That’s not to say it isn’t delicious or a fantastic sandwich. It is. It just isn’t the sort of thing that most people would serve after an expensive meal.

The prego: what’s in it?

The prego (prego no pão) is an incredibly simple sandwich. It’s made from thinly-sliced beef that covered in a garlicky marinade, grilled, and served in a papa seco bread roll. The beef itself is, in keeping with most Portuguese beef, low-quality and basic. This definitely isn’t the kind of meat you’d find in a steak restaurant.

The marinade varies depending on the restaurant or bar. In some places it might be as simple as garlic and butter, while others will mix garlic with wine and herbs and spices into a house marinade, which of course is kept a secret.

The key ingredient here is the garlic, and the name “prego” implies that without the garlic this isn’t really a prego. It’s just a steak sandwich. 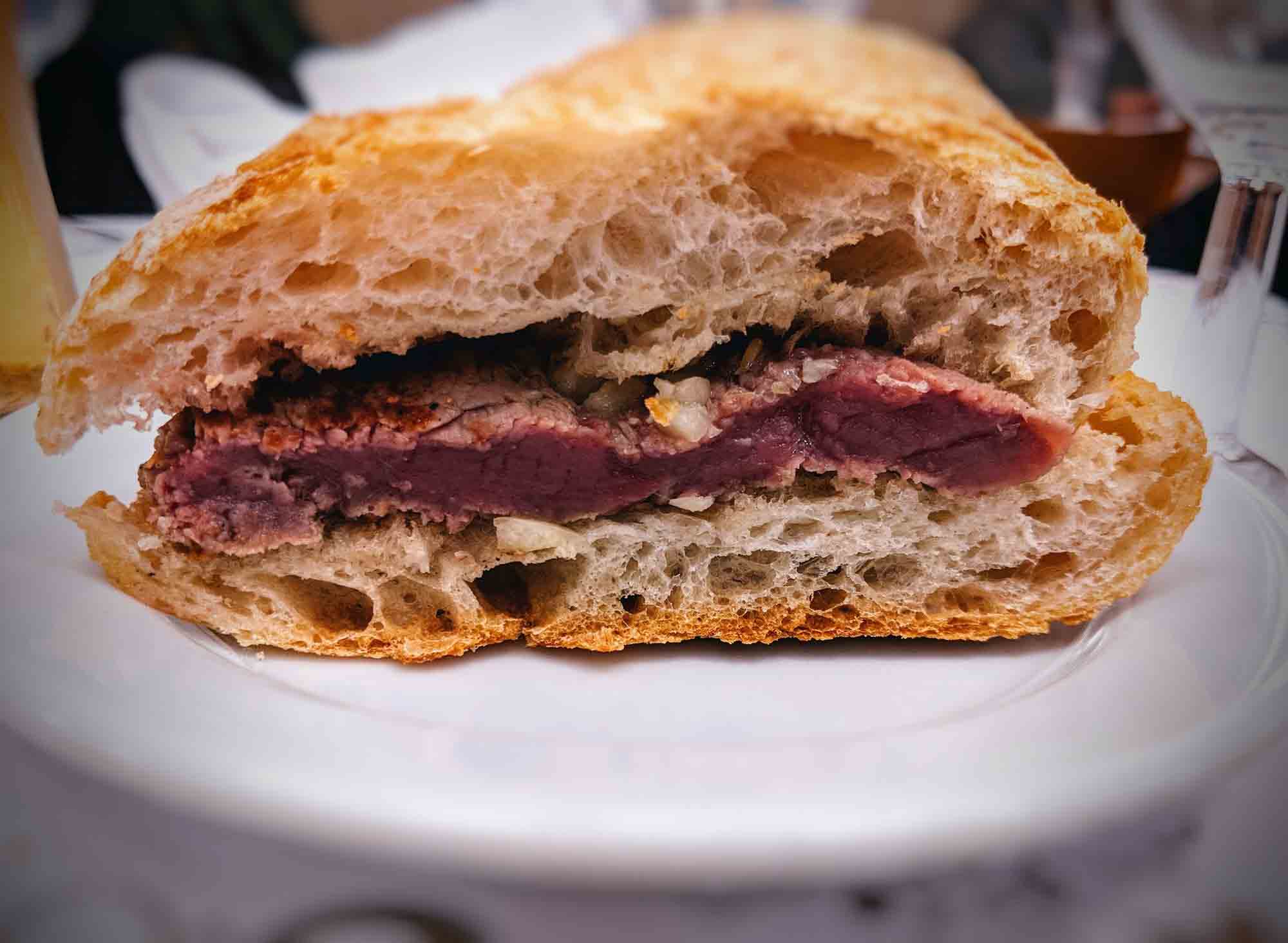 Most people will add mustard to their prego. Some places do make their own mustard, but they’re the exception. Most places will have a bottle or sachet of squeezy mustard to hand. This all seems very basic, particularly if you’ve just finished a seafood dinner.

Prego no pão vs prego no prato

It’s important to point out the full name of this sandwich: prego no pão. Order a prego and you’ll most likely get the sandwich we’re talking about here, but it isn’t the only type of prego. You may also see the words prego no prato on the menu.

On Portuguese café menus, burgers and sandwiches tend to be either “no pão” or “no prato”. No pão means your food comes on bread or as a sandwich while no prato means it comes on a plate (without bread).

Pregos around the world

As well as Portugal, you’ll also find pregos in Mozambique and South Africa. Pregos in South Africa tend to be a little fancier. The meat is usually much better quality and often a thicker cut. It’s also common for South African pregos to be topped with other ingredients like vegetables, salad, and cheese, and cooked with “prego sauce.” Essentially, it’s a burger but with a steak instead of a meat patty.

These are delicious, and definitely worth trying, but they’re just too fancy to be a Portuguese prego. A Portuguese prego is just simple, and it’s unique in that way even in Portugal.

The bifana, for example, has some regional variations (Porto bifanas are different to Alentejo bifanas) while the Francesinha has even more variations. The prego, on the other hand, is pretty much the same across the country although there are some restaurants with their own takes (O Prego da Peixaria in Lisbon serves a tuna prego, for example).

Have you tried a prego? What did you think? How does it compare to the bifana? Share your thoughts and prego reviews by leaving a comment below.