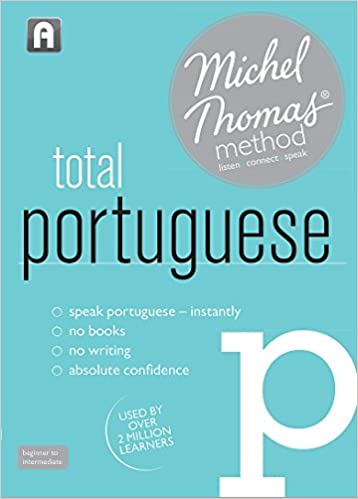 Michel Thomas Portuguese is an interactive audio-based course that covers European Portuguese. It’s interactive because the teacher, Virginia Catmur, explains an aspect of Portuguese, she asks her two students several questions. Sometimes she also asks Paulo, the native Portuguese speaker in the group, to demonstrate how something is correctly pronounced.

The constant questions keeps the lessons interactive and practical rather than the lessons being entirely one-way. As the listener, you’re supposed to hit the pause button and try to answer the questions yourself.

Here’s an example from CD 2 of the advanced level:

You get the idea.

Each question forces you to build a new sentence using the grammar and vocabulary you’ve previously learned. Not only is the method fantastic for getting you building sentences, but it also really builds your confidence when you realise just how many sentences you can form.

There’s no memorisation as you’re encouraged just to absorb, but there does come a point where you actually need to start taking notes and revising concepts. There is an accompanying PDF book, but you’ll probably want to take your own notes as well.

Although the courses don’t correspond to a level on the CEFR scale, it’s probably somewhere around the start of B1. So, A2 and a bit.

That constant interaction is similar to the Pimsleur Method, but the Michel Thomas Method definitely goes a lot further than Pimsleur which only teaches a limited amount of vocab and especially grammar.

Each lesson is typically around 8 minutes long, which is a nice manageable chunk, and each CD (or MP3 bundle) has around 10-12 lessons in it.

Like Pimsleur, the course is a great confidence builder and, as you answer each of Virginia’s questions, you realise how much you know how to say in Portuguese.

Like every language product, The Michel Method has its strengths and weaknesses. Some are typical of many language products (most courses, for example, don’t include speaking practice) and some are unique to this particular course.

Here are the pros.

Gets you building sentences

Despite being audio-based and before the days of apps, the course is very interactive and it gets you building sentences. Too many courses teach you the grammar but don’t get you actually using it.

Michel Thomas Portuguese is basically a grammar course. It covers several tenses including present, future, past, conditional, estar a + infinitive, and the command tense (along with lots of other grammar concepts) but without ever feeling too overwhelming. That’s not to say it doesn’t get difficult at times, but it’s definitely one of the easiest introductions to Portuguese grammar.

Virginia shares lots of useful mnemonics, rhymes, and groupings which make it much easier to remember words and grammar concepts. These days, we’d probably call them “language learning hacks.”

And, now for the cons.

One major criticism of the Michel Thomas Method is that the students used in the class make mistakes, and having to listen to these mistakes not only slows the class down but may also confuse you as well.

There’s definitely a lot of truth to that, but it’s also the case that many of the mistakes that the students make are ones that you might make as well. If it weren’t for hearing them make the mistakes (and be corrected), you might keep making the same mistakes too.

Being entirely audio-based (although there is an accompanying booklet) the course has its limitations. There’s no reading, writing, and not a huge amount of listening. It’s mainly a grammar course.

No course is perfect, though, and most courses have gaps that you’ll need to fill in yourself. Most other courses have reading and listening material, which this course does not, so you’ll have to find resources for practicing these skills yourself (don’t worry: Portugalist has lots of resource recommendations). Very few courses allow for speaking practice with a native speaker, and Michel Thomas Portuguese is the same, so, again, that’s another gap you’ll have to fill in.

A lot of the content in the advanced course is a refresher of what was covered in the foundational course, which is disappointing as it would be great to continue this method through the more difficult levels of Portuguese.

As mentioned, the course takes you to around A2 or early B1-level, which is still really the “getting by” stage for living in Portugal. If you want to move progress — and it’s recommended you aim for at least B2 — you’ll need to look at other materials for the next levels.

The combined foundation and intermediate MP3s cost $152 when bought from the Michel Thomas website, but there’s a 30% discount when you use the code MTMPORT which brings the price down to

This is roughly the same price as the A1/A2 bundle from Portuguese Master Course, but better value than Pimsleur as Pimsleur only really only covers the A1-level.

It’s hard to compare the cost to subscription-based products like Practice Portuguese or Portuguese Lab Academy as they charge per month rather than a fixed price but, in theory, they could offer better value for money if you were studying all the time.

Overall, the course is priced about average. Of course, cost isn’t everything and you absolutely shouldn’t just go for the cheapest product but the best.