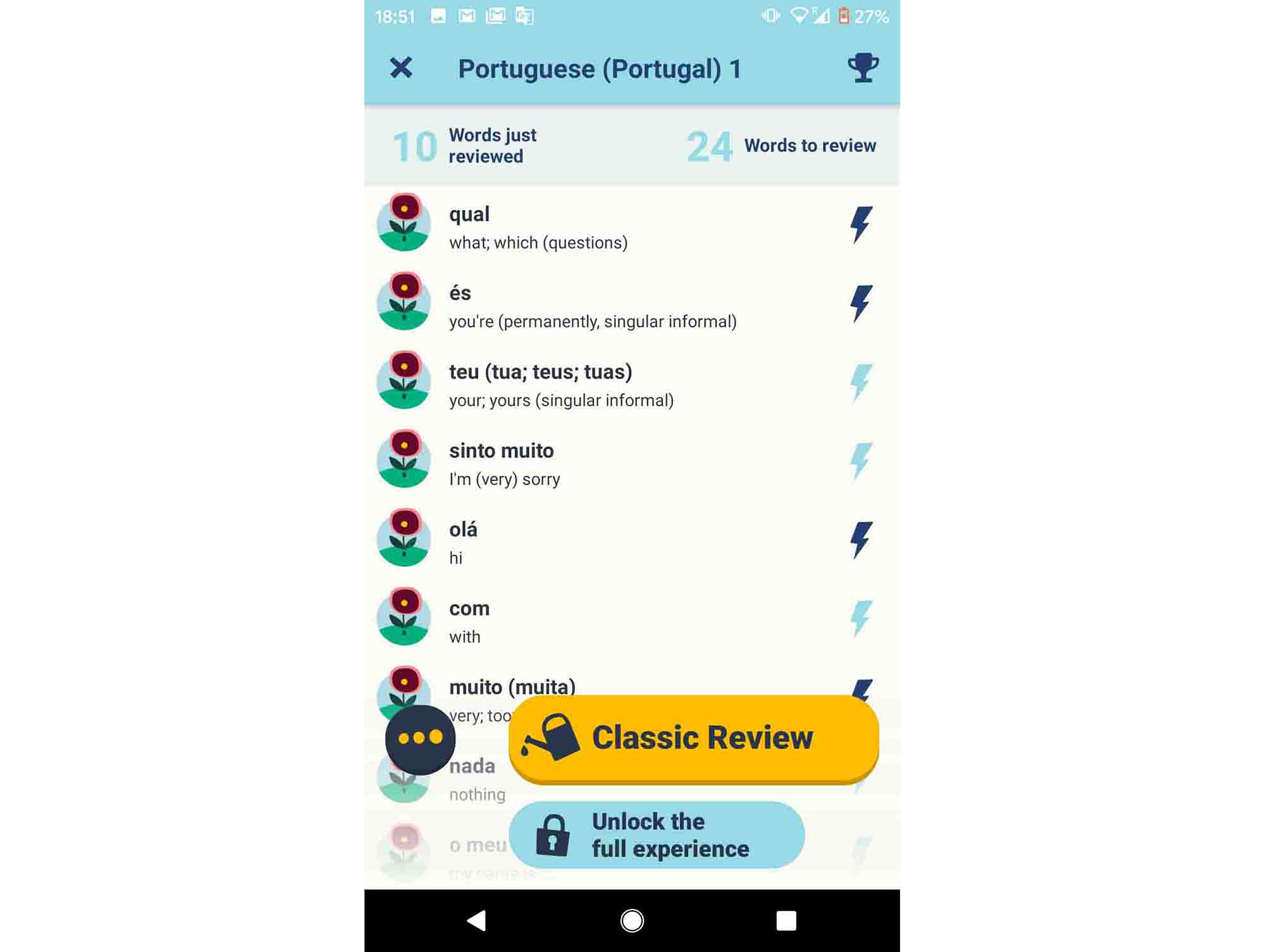 Memrise is a spaced-repetition flashcard app that’s useful for memorising words, phrases, concepts –just about anything really. It’s popular with language learners but, but Memrise is used by people studying all kinds of subjects including medicine, history, geography, you name it.

Memrise has courses that cover both European Portuguese and Brazilian Portuguese. Some of these courses are official courses made by the Memrise team, and they often include snippets of audio and video to help with pronunciation, while others are submitted by Memrise members.

You can go to Google Translate, for example, grab all the words that you’ve “starred,” export them to a spreadsheet, and then bulk import them into Memrise. That way rather than just looking up words that you don’t know, you’re really committing them to memory.

The stength of this is learning vocab, phrases, and some grammar. It doesn’t teach you to form sentences. It doesn’t really really help with reading, listening, or speaking. Remember what the strengths are. This is a good tool on its own, but it’s only good for one or two things.

Memrise is great for one thing — as the name implies — committing things to memory. On its own, it won’t be enough for you to learn a language, but it will help you to memorise vocabulary, phrases, and, to a certain extent, grammar.

It won’t teach you to form sentences like Michel Thomas or Pimsleur will and, although it’s an okay app for teaching grammar, there are better tools out there. It won’t really help you to practice speaking like italki will, and it’s not really going to improve your reading abilities (although there’s obviously some reading involved).

But, no course or tool is perfect. Most of them tend to be really good in one area, but weak in other areas. The reality is that you’ll have to use several of them if you want to get good at all of the components of learning a language: speaking, reading, writing, listening, grammar, etc.

And what Memrise does — memorisation — it does well. Some would say that Anki is better, but Memrise is more user-friendly so it’s probably better for most. It’s also free whereas Anki charges for the iOS apps (it’s free on desktop and Android).

Besides focusing on just one area, vocab, the biggest annoyance with Memrise is that it’s quite repetitive. Even if you know a word, and constantly get it right, Memrise will keep quizzing you on it. It would be great if there was a button that said “I know this word, don’t ask me for at least another fortnight.” Instead, Memrise relies on its own spaced-repetition algorithm which doesn’t seem to get this.

Thankfully, you can skip levels of courses unlike other apps like Drops and Duolingo. This means that if you already know the word for bread or dog, you don’t have to spend weeks working your way through the beginner levels to get to your correct level.

Like most apps, there’s both a free and paid version of Memrise.

For most people, the free version will be more than enough. The pro version is slightly more advanced, and includes features like statistics to show you how you’re doing, but its main selling point is that has an offline mode. If you don’t have internet on your phone all of them time, this may be worth getting.

For more information, visit Memrise.com. Memrise contains both courses for both European Portuguese and Brazilian Portuguese.

A spaced-repetition flashcard app, Memrise is great for committing new words and phrases to memory.